I was a bit bemused and slightly uncomfortable when I saw that Patrice Evra was starting at left-wing for the Stoke game. That doesn’t make much sense really, since he played as a winger in the PSG youth team and for Marsala in Italy, and even as a centre forward for Nice in France. 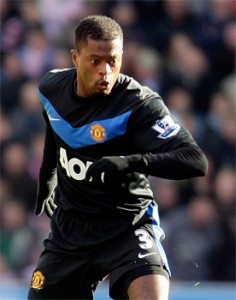 I was a bit bemused and slightly uncomfortable when I saw that Patrice Evra was starting at left-wing for the Stoke game. That doesn’t make much sense really, since he played as a winger in the PSG youth team and for Marsala in Italy, and even as a centre forward for Nice in France. He even had brief cameos as a winger in his first few games for United, and he has all the attributes that make an effective winger (pace, stamina, good crossing and commendable dribbling skills). Maybe it was awkward because it meant John O’Shea was playing at left-back, and we all know what that can lead to (although I’m assuming he was played there because of his aerial ability and a certain Mr Delap’s throw-ins).

But Evra has been one of the worlds best full-backs in the last few years (although certainly not the last couple of months), and that’s because he epitomises the modern full-back; pacey, skilful and adventurous. If you look back ten or so years ago, when 4-4-2 was the predominant formation, the more favoured full-backs were the likes of Denis Irwin, Lee Dixon and Nigel Winterburn. Solid and reliable. So why did this change? The tactical boffins at Zonal Marking attribute it to the following:

“The basic reason they [full-backs] became crucial is that they were constantly the only players in any real space. If a 4-4-2 plays a 4-4-2, with wide midfielders picking up wide midfielders, full-backs are the only players left with space in front of them to move forward, meaning they often see as much as the ball as any other player on the park.

The situation has now developed so far that wide midfielders are often deployed primarily to stop the opposition full-backs advancing – Sir Alex Ferguson has done this brilliantly in recent years – Wayne Rooney and Park Ji-Sung play this role excellently and Antonio Valencia did a superb job on Ashley Cole earlier in the season.”

Or take Jonathan Wilson’s analysis of the United vs Inter match in 2009:

“In the first half, Park Ji-Sung, presumably selected ahead of Wayne Rooney for the purpose, restricted Maicon’s attacking surges from right-back, which, given how narrow Inter’s midfield was, allowed Patrice Evra to advance. If it looked at times as though United had an extra man it’s because, effectively, they did.

After the break, though, as Ivan Cordoba replaced the hapless Nelson Rivas at centre-back, Estaban Cambiasso was able to play higher – in the first half, he had almost become an auxiliary centre-back, so deep had he dropped to bail out Rivas – allowing Zanetti to push further to his right and so restrict Evra. Accordingly, the second half was far more even than the first had been.” 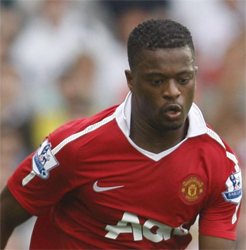 Evra is superb at the overlap, a common sight in many games is Pat utilising his lightning pace by getting to the byline to drill the ball across the face of the goal. But this was when United were playing a 4-2-3-1, with Nani or Rooney or Park on the left cutting in, either to help the midfield or get onto their stronger foot, providing Evra with ample space by the corner flag in which to venture.

But this season 4-4-2 has been the default strategy, with the front players often swapping positions so as to avoid predictability. Just look at the number of times where Nani is the frontman or Berbatov drifts to the wing or sits deep, it’s quite remarkable. And with Tony V’s injury, Nani is more likely to be found on the right than the left, meaning it’s on that side, where Rafael plays, that we’ll see the overlaps past the winger who’s cutting in to be more involved with play, hence why Rafael finally seems to be the first choice right-back.

But if Rafael or Evra were a six-footer, things would certainly be a lot easier. I’m not entirely comfortable with having half of the defence being about 5 foot 8, and I don’t think Fergie is either, especially against a team like Stoke.

So perhaps this Evra on the left-wing malarky is a one-off, or at least a rare event. Gary Neville is no man mountain either, so it did, in a way, make sense to play John O’Shea at left-back (but let’s leave his ability to break up every single United attacking build up through his awful passing to another time).

And there’s no denying that Evra put in a solid performance on Sunday, although there were still moments of frustration. He certainly appears more at ease attacking on the overlap and running at people whilst already at full pace than using trickery and acceleration to skin a man, but he was no slouch at getting into attacking positions, he can even claim an assist for the winning goal.

But I can’t help but feel that to play Evra on the left wing is to not play to his main strengths. Very few wingers out there can match him for raw pace, and his incredible stamina ensures that any spare man within his vicinity will be closed down in no time at all. Then you have to consider the point highlighted by Jonathan Wilson above, that attacking full-backs peg back opposition wingers. To play a sluggish defender like O’Shea at left-back is to give the opposition right-winger the freedom to venture forwards.

A man that does deserve a prolonged run on the left wing though is Gabriel Obertan. As put forward by Bryan Robson in tonight’s match programme, the man is clearly a confidence player, and so he needs a good run in the team in order to get the best out of him. I’ve certainly been impressed by his technique, speed, improved physique and direct runs at the opposition, and by playing as a centre forward tonight against Wolves he’s shown that he is more than a byline hugging step-over monkey. Until Hernandez came on he was the brightest spark on the pitch, and standing at 6 foot 1 he makes up for Evra’s slight vertical inadequacy.

So what do you think? Is Evra on the left wing something United should try more, or should we play him at left back and give others the left wing position?