I made the case in a recent post that United’s performances thus far this season indicate that we’re still too reliant on Paul Scholes, a 36-year-old, to pull the strings in midfield and get the team playing like one that is capable of crafting out goal scoring opportunities. If we’re lining up in our default 4-4-2 without Scholes in there, there’s a good chance that a night of misplaced passes and sloppy first-touches is about to ensue.

As such Michael Carrick has taken a lot of stick, with many thinking that he should be the one to take up this playmaker mantle. I’ve defended Carrick before and will continue to do so. Carrick isn’t that type of player; he’s neither a “box-to-box” player in the Fletcher mould, nor is he a deep-lying playmaker in the Xavi or Renaissance Scholes mould. He’s your modern midfielder (link here), and as such thrives in more modern formations.

Nothing is more indicative of this than by comparing his performance against City in the derby (link here) to that against Aston Villa the following game (link here). Against City, in a midfield three with Scholes and Fletcher, he thrived, making 7 interceptions and 59 of 61 passes, many of which were positive and attacking. Against Villa, where he had more defensive duties, he struggled. Carrick just isn’t creative enough or sufficiently defensively driven to work effectively as a midfielder in a 4-4-2.

So given United’s failure in signing Ozil (who seemed to have his heart set on Real) or Sneijder (who decided to sign a new deal at Inter, despite Rafa Benitez being the manager), and coupled with our inability to splash out on big name players, it appears we may have to look amongst the home-grown talent in order to find our new playmaker. Given the English approach to football, this isn’t going to be easy.

Tom Williams, of the superb Football Further (link here), has run a recent series of interviews (link here) with several football coaches in order to highlight the flaws and deficiencies present in contemporary English coaching methods. For the last few years many have lambasted the technical deficiency of English players compared to their foreign counterparts, but the problem is much more complex and runs much deeper than that. The issues are tactical and psychological as well. To take a few quotes from the interviews that affirm this claim:

“Children here just do not seek to keep the ball as well as their continental cousins. The reasons proposed for this are as interesting as they are varied. But, essentially, it seems to boil down to the fact that keeping the ball and playing short, simple passes is boring and ‘uncool’. There is a general desire for kids to ‘be the hero’ – to burst forward and try to score that wonder goal rather than keep it simple and invite others into play, and the on-off determination to say ‘I know best’ and foolishly ‘go against the grain’ with what the coach is attempting to teach. While seen as relatively harmless at such a young age, it sets a precedent for the future and it is considered one of the greatest coaching challenges to change that mentality.”

“The odds are stacked so high against young goalkeepers and in favour of attackers, that the rational strategy for a strong player is always to hit a high shot from wherever they happen to be stood on the pitch. By removing the constraints on these types of actions in the game we also remove many of the elements of excitement. Small-sided games reintroduce those constraints and so force players to make the decisions and pull off the techniques that will continue to serve them as they progress through the age groups and into the full version of the game. There is a slow shift amongst grassroots coaches towards acknowledging that players need to learn how to achieve ‘outcomes to football situations’ rather than the more simplistic ‘results’. I hope this is an idea that gains wider acceptance in the coaching community.”

“In England a similarly sized town might have 10 competing junior clubs. This necessarily waters down the quality of facilities on offer and means the stronger players are invariably split across the teams. In footballing terms this means that all the teams play on poor playing surfaces instead of a high-quality shared pitch. It also means all the best players are stationed permanently in either centre midfield or up front, where they can score lots of goals against inferior opposition and afford the coach victory over their ‘local rivals’. I’d like to see all the most talented players grouped together so that we have junior grassroots teams in which the centre-halves can play out from the back, the full-backs can carry the ball up the pitch and so on. If we had either more direction from the top or more consensus at the bottom of the football hierarchy then we might finally start to see a different, more fluent, style of play emerging” 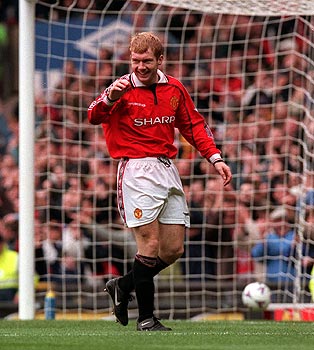 I’ve touched on this issue before (link here) regarding this mindless, “passionate” approach that England adopt, how they prioritise the wrong attributes in footballers, and how United must avoid this. Because as Simon Barnes of The Times purports (link here – subscription required), it’s not that we English don’t like flair, it’s that, when an Englishman possesses such virtues, “…we suspect that there is something wrong with the possessor…flair becomes a dangerous aberration, a monstrous self-indulgence, something terribly dangerous and untrustworthy. There’s something not quite right about an Englishman with flair.”

But do not fear, times are not as troubled as is being made out, at least for United anyway. Because the third interviewee of the aforementioned Football Further articles, Pavl Williams, is currently working with youngsters aged 6-16 at United’s Carrington training centre. Although I’m sure other Premiership clubs can claim such similarly cultured coaches on their roster, at least we’ve got the wise old words of ours on paper! And who knows, with the likes of Ravel Morrison and Tom Lawrence coming through at United, Jack Wilshere at Arsenal, Jonjo Shelvey at Liverpool and Joshua McEachran at Chelsea, perhaps the times are already changing. But will one of these be a player like Paul Scholes? I seriously doubt it. England will never produce another Paul Scholes.

But as pointed out by James Goyder of The Independent (link here), let’s not become obsessed with youth. “There is an important distinction between potential and ability which football is in danger of losing sight of. Players with potential might offer clubs the greatest margin for profit but it is players with ability who win trophies…youth is no substitute for experience and younger does not necessarily mean better.”

And one player that instantly springs to mind as being capable of filling the Paul Scholes void is Bastian Schweinsteiger. Aged 26, he’d be a great fit for United. Able to play as a deep-lying playmaker in a 4-4-2 or an attacking midfielder 4-3-3, he could provide the perfect platform on which United can build a versatile attacking unit for years to come.

What do you think? Is Carrick surplus to requirements? Can England ever produce another Paul Scholes? Is Schweinsteiger the right man for United? Have your say.

9 thoughts on “Replacing Scholes – Don’t Expect Any Help From Home!”