As Sir Alex Ferguson gets ready to overtake Sir Matt Busby as the longest serving Manchester United manager of all time on Sunday I was planning to do an article paying tribute to his near quarter century at Old Trafford. That plan changed abruptly when I came across a Daily Mirror story in which Sir Matt’s son Sandy spoke of his memories of what his father thought of Ferguson during his early years. How could I possibly do any better than that? This is what Busby junior remembers from those years.

David McDonnell wrote – Sir Matt Busby’s son knows exactly how his father would respond to Sir Alex Ferguson overtaking him as Manchester United’s longest serving boss “If he were here now my dad would hold a gun to Alex’s head and make him sign a new contract for another five years” said Sandy Busby. “He would be so proud of what Alex has achieved for United and I know he couldn’t think of a better man to succeed him as the club’s longest serving manager.” 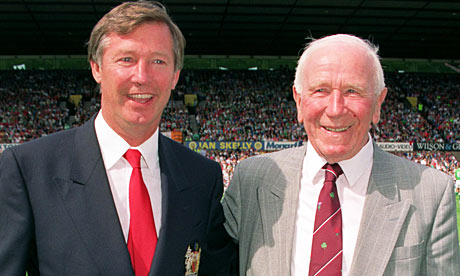 Fergie will reach that remarkable landmark on Sunday when United play Chelsea, passing Sir Matt’s longevity in the club’s record books almost a quarter of a century since arriving at Old Trafford. When he takes his place in the Stamford Bridge dugout, Fergie will have been in charge for 24 years, one month and 14 days, one more than Busby’s total over two stints – from October 1945 to January 1969 and December 1970 to June 1971.

The parallels between the two greatest managers in United’s rich history are compelling. Both Scots, both from tough, working class backgrounds, both sharing the same footballing philosophy and vision of how the game should be played. Sir Matt’s policy of giving young players a chance spawned the iconic Busby Babes, an ethos Fergie has adhered to during his own reign, nurturing and trusting the likes of Ryan Giggs, Paul Scholes, David Beckham and the new generation of United youngsters.

When Sir Matt took over at United in 1945, the club was in turmoil. Financially crippled, Old Trafford had been reduced to a bombsite during the Second World War and they were forced to play their games at Maine Road, home of local rivals City And when Fergie arrived in 1986, United were mired in mediocrity and self recrimination. Yet, like Sir Matt, who led United from the despair of the Munich air disaster to European Cup glory in 1968, Ferguson restored the club’s standing on the world stage.

“I’ve always said that my dad was the foundation of United and Alex was the resurrection” said Sandy, whose family still retain a strong association with United. “Alex was very fond of my father. When my dad still had an office at Old Trafford, Alex used to stick his head around the door and say ‘How are you auld yin’, which was a sign of respect in Scotland.

“He used to come to him for advice in his early days at United and, after meeting Alex, my dad said ‘He’s the one. We’ve finally got the right man for this club’. How right he was. “There are so many similarities between the two of them, not least in their tough upbringings which made both of them the strong minded individuals that enabled them to be so successful.

“My dad had played for Manchester City, where he noticed there was no real encouragement for young players. You had to almost be the finished article before you got into the first-team. “He vowed then that if he ever became a manager, he would invest heavily in young players, which is the philosophy that spawned the Busby Babes and one Alex has continued at United.

“People say they had a different way of losing their temper. But my dad could cut a player or person down with his tongue. And when he did that, you knew you were in trouble. It’s also said that Alex used to shout and throw things around, which he probably did in his early days, but he’s cooled down the older he’s got. But they both shared that fierce will to win.

“When Alex came down to United in 1986, I was running the souvenir shop at Old Trafford, now called the megastore, which shows you just how much the club has grown since. I remember Alex bought virtually every book there was on United, to learn as much as he could about the club and its history. That showed the depth of his commitment and determination to succeed.”

When Sir Matt retired, United entered a period of decline from which they were saved only by the arrival of Fergie who ushered in an unprecedented era of success which currently stands at 11 titles, two European Cups, five FA Cups and four League Cups. Celebration of Ferguson’s remarkable milestone in surpassing Sir Matt’s tenure is tempered at United by the gnawing reality of the need to replace the club’s most successful boss when he eventually steps down.

And while it is impossible to see a repeat of their 1974 relegation following Sir Matt’s departure, Sandy admitted United’s biggest challenge is finding a successor who can maintain Fergie’s historic legacy. “United, in this day and age, can’t afford to have the same situation that happened after my dad left, going 26 years without winning the league” said Sandy.

“My dad retired at 60 because he felt he could no longer achieve what he had done in the past. I think it was the effect of Munich finally taking its toll on him. But 60 is no age to retire now for a manager. Look at Alex. He’s coming up to 69 and he’s still going strong, still the best man for the job.

“It was hard for the managers who followed my dad and it will be nigh on impossible for the man who succeeds Alex. How do you follow an act like that? My dad never interfered with the United managers who came after him because, as he said, no one ever tried to interfere with the way he did things. I’m sure Alex will be the same and leave a great squad for his successor. My dad saw United as his club and as such, he always wanted what was best for it. The club, he always said, was the most important thing.”

Fortunately, the way things are looking at Old Trafford, Sir Matt would not have needed to use that gun. May Sir Alex stay around for many more years to come.