There are few things in this world that gives more satisfaction than watching an innocent, starry eyed child develop into a mature, successful man. It can happen in any walk of life but more so in football where there are relatively few opportunities in a dog eat dog environment. One such man is Spain and Barcelona central defender Gerard Pique who came to Manchester United from the Spain as a 17 year old and stayed four years before returning home. At the age 24 he is now a World Cup, twice Champions League, twice La Liga and a Premier League winner yet he still rates those early years at Old Trafford under the guidance of Sir Alex Ferguson as immensely critical to his success.

“My relationship with Ferguson was always very good. He knew I had the quality to be a good central defender and will always be grateful to him for the way he treated me” he still says today. Pique has come a long way since the time when as a young boy at United, he was handed a video of Italy’s AC Milan legend Franco Baresi and told to watch and learn. 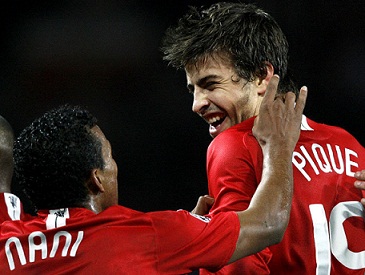 “I was given the film by one of the coaches, Jim Ryan, because he said that I shared some of his characteristics and that I could learn a lot from him” he says remembering the moment back in 2004 when United’s backroom staff began the job of grooming the former Barcelona youngster into a Premier League defender.

If he needs to draw any deeper for inspiration then he can always call on those formative years spent at Old Trafford. “My style suits Barcelona’s style of play. I came through the system there and the way I play now is the way I was taught to play as a 13 year old” he says.

Pique was given his Champions League debut by Sir Alex in a 3-0 defeat to Fenerbahce and he took his place in the stands in Moscow in 2008 when United beat Chelsea on penalties to win the tournament. “To play alongside players such as Rio, Wayne Rooney and Ryan Giggs, who for me is one of the greatest players in the history of football, is unforgettable and invaluable in terms of what I then went on to do.”

“I speak with Rio on Twitter sometimes” Pique admits. The Spaniard suggests that Ferdinand whose career has been so blighted of late by injury, has perhaps not been given the recognition his achievements deserve. “What you have to remember about Rio is that he always cost so much money, he has always had to maintain a very high level to justify the price tags.  That is why the fact that he has always performed game after game, season after season, at such a high level has so much value. Nobody could have asked any more of him throughout his career.”

The Pique relationship with Ferguson was always a healthy one. The manager took the young defender and his parents to dinner when he had just arrived at the club, despite suffering a defeat on the Saturday – something that had a big impact on the new arrival. So much so that he admits he was filled with trepidation when the moment came to tell his manager that he wanted to head home. “I learnt so much on a professional and personal level” he says of his four seasons on United’s books.

Pique left United before he was really tested in England. He had reached the point in his career when he needed to play regularly or move on, United possessed the finest central defensive pairing in the world – the same one they have now, only back then they were fit every week and undroppable.

The Spain defender came face to face with both Ferdinand and Nemanja Vidic in the Champions League final in Rome one year after he flew the United nest. He came out on top and his former manager Ferguson was one of the first to congratulate him.

“To find myself up against the players who just a year earlier I had shared a piece of history with – winning the League and European Cup double, was very emotional and to see Ferguson again was special. We spoke after the game and he said that we had been worthy winners and that meant a lot to me.”

Depending on where the wheel of fortune comes to a halt this season, the young man who came to Old Trafford as a kid may once again face his former mentor and team mates in another Champions League Cup Final at Wembley. Whatever happens, there cannot be any doubt that the mutual respect will always remain.

Was it the time right for Pique to go back home when he did?

5 thoughts on “To Sir Alex – with many thanks from Barcelona”