“CHAMP19NS”  is a hardcover, 264 page book published by Simon & Schuster that belongs in the library of every Manchester United fan. Why? Because it records history! An official account of a 19th title which made it the most successful club in the annals of English football. The players bring you inside the dressing room to hear about reaching the Champion’s League final and every moment of their Premier League campaign.

Manchester United began the 2010-11 season with the longest unbeaten start to a campaign in all competitions in their history, though they also had a couple of surprising slip ups dropping points late in matches. However, Dimitar Berbatov was banging in the goals, Nani was flying down the wing while new arrivals Javier Hernandez and Chris Smalling all made early impacts for the Reds. 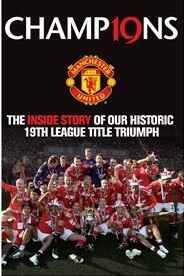 Meanwhile, the negotiations for Wayne Rooney’s new contract were played out over the front pages. All this proved, once again, was that United remained the biggest story in sport. But it was so familiar for Sir Alex Ferguson – who entered his 25th year as manager of the club, who knows all about the pressures of being in charge at the biggest club of them all and making sure that his charges delivered where it really matters – on the pitch.

With in depth contributions from key members of the squad and the backroom staff, this book is the definitive account of United’s record breaking 19th league title season.

As one reader astutely commented “This is a must have for any Manchester United fan. A perfect way to recount the brilliant season that saw United become the most successful team in England. Brilliantly put together with Steve Bartram, it will instantly make any bookshelf  look better!”