Manchester United fans are never short of faith in their side. manutd.com has now found Colin Mattheus, who revealed how the Old Trafford faithful inspired him to get a special tattoo dedicated to the Reds. Prior to kick off in the Champions League semi final second leg against Barcelona in 2008, the Stretford End displayed a message of support to the players by holding up a mosaic of the word ‘believe’. Sir Alex’s men didn’t let the fans down as Paul Scholes’ glorious winner fired the Reds to Moscow. 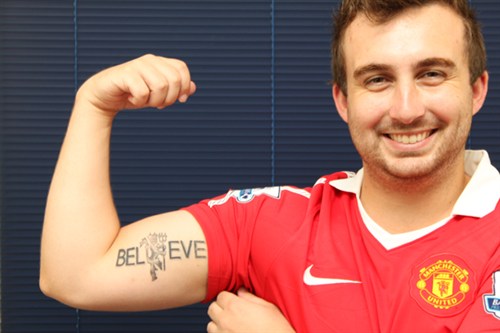 The ‘believe’ message was on display again in the United end at the Luzhniki Stadium as the Reds prepared to take on Chelsea, and it proved to not only be an inspirational message to the team but to Colin as well who has since had the word tattooed on his arm.

“It was such an amazing sight as the players walked out to see the word ‘believe’ across the Stretford End and then in Moscow, and there’s no doubt the fans played a huge part on two unforgettable nights” says Colin from South Africa. “After that I decided to include ‘believe’ as part of a United tattoo I was getting.”

“Some of my mates think I’m crazy but my United friends love it. I just wanted to get something to show my allegiance to the greatest club in the world and the ‘believe’ campaign really inspired me.”

Do any of our readers have United tatts that they want to show off?

1 thought on “'BELIEVE' This United fan certainly does”

Will Manchester United Finish the 2019/20 Season?