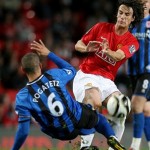 Sir Alex Ferguson launched a contemptuous attack on Emanuel Pogatetz after the Middlesbrough captain of his dirty tackle on Brazilian youngster Rodrigo Possebon. The 19-year-old Brazilian midfielder was taken to hospital. It was expected the Possebon has broken his leg, but United have confirmed that he has not broken his leg.

“It looked a really bad one. For the kid to make his first team debut and get an injury like that it was pretty horrendous,” said Fergie.

“For 10 minutes everyone was numb about it. The thing about these challenges it is always the case that the opponent claims his innocence.

“One of their bench is out screaming that it wasn’t a sending off and there was nothing wrong with the player.

“But at least they apologised. Gareth Southgate understood the gravity of it. He was very, very apologetic. But it was a terrible tackle.

“I have seen a video of it and you don’t want to see that again. We just hope it is not really, really serious, but it looks bad.”

Was the Ref decision correct?