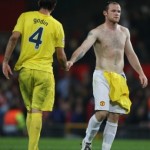 Wayne Rooney has confirmed himself ready to take his United goal bombardment on to the international stage for the back-to-back World Cup qualifiers against Kazakhstan and Belarus. Rooney could score three goals out of the last three games.

“This was a really good result for us and I think we have repaired the damage now,” said the England striker.

“That is four of our hardest games of the season out of the way and we are still in a decent position in the league.

“Hopefully we can go on a good run now and start climbing the table.”

Now, the golden boy looks a different player to the one that went into battle against Andorra and Croatia, where he scored and was instrumental in England leaving Zagreb with a 4-1 win that leaves them in pole position to reach South Africa in 2010.

Rooney might have struggled to take that form into his displays for United but after being introduced as substitute against Bolton last week, there has been no stopping the former Everton youngster, of whom so much has been expected from such an early age.

“I just want to help the team really but of course, I am pleased to be back scoring goals,” he said.

“I tend to score in spurts. I have been like that throughout my career. Hopefully I can go on like that.”

Will Rooney continue his scoring goals?