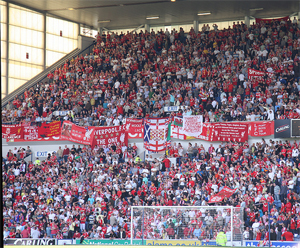 Alright fans, it seems our defeat against Liverpool has made a massive echo around the media and fans blogs. For me it is normal, any big club like Manchester United will receive such comments from newspaper editors and also LIVERPOOL fans.

I read some articles in newspapers like The Guardian and a scouser fan site about their victory against Manchester United. They suggested  its just the beginning for their team to win the English Premier League for the first time in their history (yes I know they won 18 times before, but it was the first division 😀 ).

They forget that it was just a game, a derby game, which has three options (Win, draw or loss!). While our team will benefit from this defeat as it will give Sir Alex Ferguson and the players a good lesson in how to stay focus during the season, I won’t wonder if Liverpool can collect only four points from their next three games in the premier league as they are living in their pink dreams!

I think all scousers should forget winning the premier league as all FACTS say that Chelsea are second of the table at the moment without forgeting Kop’ current and upcoming injuries list!

6 thoughts on “Some FACTS for Liverpool fans”