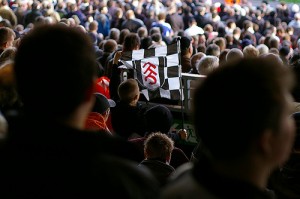 In an action-packed game at Craven Cottage Fulham beat nine-man Manchester United 2-0, their first win at home against the Red Devils in over 44 years. Sir Alex Ferguson left Rooney on the bench and opted for a five man midfield with Berbatov the lone attacker and Ronaldo being given a free role behind him.

Fulham named the same team that beat Bolton last week. The home started off in the ascendancy with Clint Dempsey nearly scoring with a low drive. Then Berbatov had a clear header but directed it wide.

The hosts were in control of the pace of the game for long periods of the first half with Bobby Zamora in particular spurning the best chance by driving wide of the goal on 15 minutes.

The turning point in the match came on 17 minutes when Fulham were awarded a corner. Davies curled the ball into the box, Zamora flicked the ball on, Scholes raised his arms like a goalkeeper and palmed the goal bound effort away and was shown a red card by referee Phil Dowd. Danny Murphy tucked the penalty away.

United seemed stunned and gave up further chances to Zamora and Dempsey, who just missed the target on the half-hour mark with a shot. Unsurprisingly, United sorely missed the suspended Nemanja Vidic as the physical play of Zamora was proving hard for Johnny Evans and Rio Ferdinand to handle.

In the second half United showed a marked improvement, no doubt due to a few choice words and flying crockery by SAF at half time. The introduction of Rooney for the injured Berbatov also had an effect. United dictated the speed of the game and looked lively in possession with their one touch passing and movement.

Fulham were content to play on the counter attack and Ronaldo headed just wide from a Darren Fletcher. Fulham, with Andrew Johnson’s movement off the ball, always looked dangerous on the breakaways.

As the Fulham crowd drew ever nervous United produced wave after wave of attack, going close when Rooney crossed for Ronaldo, who headed straight at Mark Schwarzer. He then brilliantly denied Park from close range and likewise Rooney’s follow up shot. The more United pushed forward for an equaliser though the more vulnerable they were to the counter attacks of Fulham.

On 87 minutes Johnson broke away and crossed down the right for substitute Zoltan Gera, who controlled the ball and volleyed an overhead kick past Van Der Sar from six yards out. The game effectively over United continued to attack with nine men but never looked like scoring in the final minutes.

Rooney earned a second yellow card for violently throwing the ball back when a free kick was ordered to be retaken but by then the damage had been done.

However, it wasn’t all bad news for the Red Devils. With Chelsea’s 1-0 loss at Tottenham they remain four points clear of the London club and of Liverpool, who play Aston Villa on Sunday.

Whats next for United??