Knock Liverpool Off Their F***ing Perch

Another trip to Wembley, another Cup Final and another trophy up for grabs. Between the Community Shield, Carling Cup and the FA Cup Semi final last season, this will be the sixth visit to Wembley Stadium for Manchester United fans in the last three seasons!

Mutterings of “Ahh, it’s only the Carling Cup” can well be understood, but there was something refreshingly unexpected about this much maligned trophy this season. 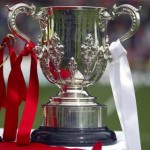 Another trip to Wembley, another Cup Final and another trophy up for grabs. Between the Community Shield, Carling Cup and the FA Cup Semi final last season, this will be the sixth visit to Wembley Stadium for Manchester United fans in the last three seasons!

Mutterings of  “Ahh, it’s only the Carling Cup” can well be understood, but there was something refreshingly unexpected about this much maligned trophy this season.

Who can argue that the cup tie which held the most interest and drew the largest television audience so far this year was NOT in the more glamorous FA Cup but the Carling two leg semi final played out between United and City?

Who would have predicted that the most engrossing tie seen for years was going to be the 2nd leg Aston Villa v Blackburn Rovers spectacle in the other semi?

True, the Carling Cup has been something of a much downgraded competition in the last few years, possibly with good reason. Mangers of the big clubs including Sir Alex Ferguson have continually used it to blood their youngsters concluding that they had much bigger fish to fry in the second half of a long, grueling season.

When the semi final draw pitted United against a confident, resurgent City however, the competition exploded into life. The tie caught the imagination of most football fans – and not only in the city of Manchester!

The Blues desperately wanted to grab the chance of clinching their first trophy in three and a half decades while United were determined to maintain the total supremacy held over their neighbors for so many years. Ferguson has never needed to be asked twice to accept such a challenge.

There is however another factor which comes into play. No matter how much the Carling Cup is looked down upon, a trophy is a trophy. It’s silver, it’s shiny and it’s certainly well worth adding to the bulging United trophy cabinet if only to ram down the throats of Liverpool fans their often stated claim that “we are the most decorated club in English football”

Well guys, that claim may be about to disappear come Sunday evening! Just in case there’s any argument about that fact consider the following official record of trophies won by each of the clubs.

There’s absolutely no doubt that these tallies will be disputed by Liverpool fans on various grounds so let’s just have a closer look at them.

Charity/Community Shields are little more than pre season games which cannot seriously be considered. For the record (Outright wins only not shared winners) Liverpool 10, United 13

Inter Continental Cup and FIFA World Club Cup are both major FIFA sanctioned trophies therefore it would be unreasonable NOT to include them. For the record Liverpool 0, United 2 (Once each trophy)

Uefa/Europa Cup, European Cup Winners Cup, Super Cup are all competitions for clubs which did not qualify for the Champions League. No club would willingly forego participating in Europes major competition rather than these inferior ones. It would be like having a preference to play in the current Football League Championship (2nd tier) rather than in the Premier. Including these trophies among the total of overall honors will be just as ludicrous as including second division titles. For the record Liverpool 6 (Uefa 3, Super Cup 3), United 2 (Cup Winners Cup 1,  Super Cup 1)

As can be seen therefore, the Carling Cup is well worth retaining this weekend as it will allow Manchester United to become “The Most Decorated Club In English Football History”

Will you be making the trip to Wembley on Sunday? We would love to hear your comments on the big day.