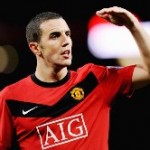 The abnormally large number of defensive injuries which gave Sir Alex Ferguson so many headaches throughout the season are at long last showing signs of abating with utility man John O’Shea set for a return to the Manchester United line-up far quicker than expected.

O’Shea picked up what initially appeared to be a dead leg during the Republic of Ireland‘s heartbreaking World Cup defeat to France. However, it proved to be a blood clot on his thigh which medical staff had found difficult to deal with effectively.

Manchester United manager Sir Alex Ferguson had feared that the injury would keep the Irishman out until the start of next season but O’Shea has made significant strides in his recovery and could return to action in as soon as two weeks time.

The 28 year-old had established him as one of Sir Alex Ferguson‘s favourites and before the injury had played fifteen games for Manchester United this season.

With the neck and neck race for the title fast approaching the home run the return of O’Shea could not have been timed any better. United’s defence has at times been almost decimated during a nightmare spell when Rio Ferdinand, Nemanja Vidic, Gary Neville, Rafael da Silva, Jonny Evans and Wes Brown were all sidelined for long spells.

What do you regard as the best position for O’Shea to slot in?