Boy with red hair and the red shirt

“Destiny” is such an abused word in everyday football language! Everything and everyone seems to be “destined” for something or other. “We were always destined to win this or that game” or “The boy was destined for greatness” How often have you heard the word used, many times without any real justification? 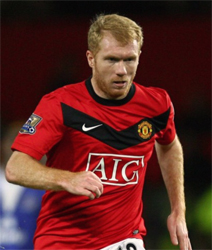 “Destiny” is such an abused word in everyday football language! Everything and everyone seems to be “destined” for something or other. “We were always destined to win this or that game” or “The boy was destined for greatness” How often have you heard the word used, many times without any real justification?

Well, if destiny was ever going to be met it was always going to be at Molineux on Saturday evening. There was Manchester United, lacking its usual firepower with strikers Wayne Rooney and Michael Owen both out with injuries, facing a desperate Wolves struggling against relegation when up popped 35 year old Paul Scholes sitting on 99 Premier League goals to strike home the winner and carry the Reds to the top of the table.

Was it destiny? Many United fans are convinced that it was. The buzz amongst them before the game was that Scholesey was going to complete his century…and how right they were!

While many of his contemporaries are sitting back enjoying their retirement, Scholes is still chasing silverware, the latest of which came  last week at Wembley but he’s not finished yet. He believes that the Carling Cup victory can only act as a springboard for further success this season.

The midfield veteran has been revered at Old Trafford ever since making his first team debut in 1994 amongst a bunch of youngsters who came through together from the clubs famous Youth System. Yes, the same system of which former Liverpool player Alan Hansen once famously said on Match Of The Day that “You will never win anything with kids”. To Hansen’s eternal embarrassment those “kids” went on to complete a famous league and cup double at the end of that same season defeating his old club at Wembley.

Perhaps the most meaningful compliments for the Salford born hero are those which come from his own peers. Some of the biggest names in world football – past and present, have been emphatic in their praise for him.  All time great Zinedine Zidane once said: “My toughest opponent? Scholes. He is the complete midfielder, undoubtedly the best of his generation” and former team mate Peter Schmeichel described Scholes as having “the highest bottom level – his worst display is still  good.”

Italy World Cup winning manager Marcello Lippi admitted that “Paul Scholes would have been one of the first players I’d have bought given the chance” and then there was Brazilian legend Socrates “He’s good enough to play for Brazil. I love watching Scholes, to see him pass, the boy with red hair and the red shirt”

The maths for Manchester United this season are now clear. Win the remaining nine matches and nobody could stop the club from winning a historic fourth successive title. Should that happen one thing is certain, Scholes will be at the forefront of such a triumph – perhaps it’s simply his “destiny” to do so in what may be his final Premier League season.

Send Scholesey your congratulations on his 100th Premier League goal