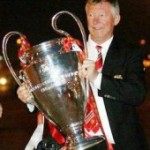 Rooney missed United’s 1-0 victory at Wolves on Saturday with a knee injury that the manager believed was aggravated by playing twice in four days at Wembley. “Rooney is very doubtful for the Milan game, that pitch killed him” Ferguson admitted “It wasn’t looking good from when he got back on Thursday, his knee was swollen. It is a big problem for us”

Ferguson is short of attacking options with Michael Owen and Federico Macheda both injured while Danny Welbeck is on loan at Preston. The only option besides Dimitar Berbatov is young Senegal striker Mame Diouf who missed two good chances after coming on as a substitute at Molineux.

United take a 3-2 first leg lead into the match against seven time European champions AC Milan. The clash also sees the return of David Beckham to Old Trafford for the first time since he left the club in 2003.

Sir Alex predicted that “Beckham will be given a good welcome and he deserves it. In my time here all of our former players have had a good reception apart from Paul Ince who played for Liverpool which was understandable”

He bounced back from getting sent off for England at the 1998 World Cup to help United win that famous Treble the following season. By 2003 however Ferguson was so fed up with the celebrity circus which followed Beckham and his wife Victoria that he sold him to Real Madrid.

With the advantage of 3 away goals in Milan, that 1st leg result promised a comfortable passage into the quarter finals but with the injury to Rooney the outcome could be far tighter than United had been hoping.