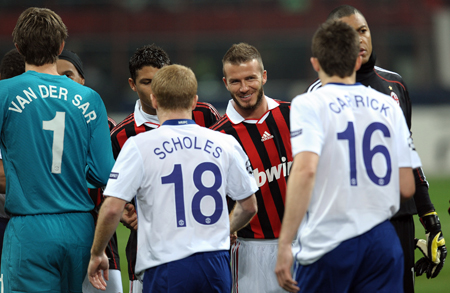 After a sensational 3-2 win at the notoriously difficult San Siro, Manchester United are in a very strong position for tomorrow game on Wednesday against AC Milan at Old Trafford.

All three away goals could be vital, with aggregate scores playing significance in the knock out stages of the Uefa Champions League. Sir Alex Ferguson will be hoping for a typically solid performance from United, with a sound back line. With the encouraging news of Wayne Rooney’s return to fitness, scoring the first goal could be the key to success, making the task for Milan even more of an uphill struggle.

Conversely, news that Wes Brown will be absent for six weeks, a player who’s performed very well at both centre back and right back this season will be seen as a disappointment.  However, with the experience of Gary Neville waiting in the wings, Ferguson will hope he has another golden night in the Champions League.

A difficult tie ahead, there’s no doubt about that. But, as long as United’s approach isn’t one of complacency, it’s hard to see the Red Devils not progress into the quarter final stage.