Standard Liege defender on his way to United 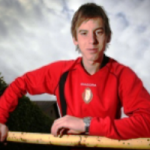 Reports in Belgium have confirmed that Manchester United have signed Marnick Vermijl from Standard Liege on a three year contract for a compensation fee of  €300,000.The 18-year-old is a versatile defender who can play all across the backline but is predominantly a right full back.

He is expected to team up with United in time for the start of the 2010-11 season and will go into Sir Alex Ferguson’s senior squad. Despite the fact that he has never played a first team game for the Belgian side, he impressed both Sir Alex Ferguson and reserve team boss Ole Gunner Solskjaer whilst on trial at Old Trafford.

It’s beginning to appear that Fergie is determined not to allow the numerous injuries which decimated his defence for long periods this season to occur again. Questions still remain on the future of 35 year old Gary Neville while central defender Nemanja Vidic is still being targeted by a number of clubs in both Spain and Italy. If he has an outstanding World Cup with Serbia, the pressure on the club to accept a large offer for his services may be too hard to resist.

Other major concerns are the ongoing fitness problems that England captain Rio Ferdinand has experienced throughout this season. Perhaps the signing of Chris Smalling from Fulham is an indication of what could be going through Fergies mind in relation to his currently preferred central defensive partnership.

There is one thing that is absolutely certain, Ferguson is determined to obtain all the defensive cover he is likely to need next season in order to cover whatever unexpected circumstances which may arise.

Is the development of young talent still the best way to plan for the future?