“Football, f*****g hell” was all Sir Alex Ferguson could say after the Nou Camp miracle back in 1999 and he must be saying the same thing now after Bayern Munich came back from the dead to eliminate Manchester United on away goals despite going down 2-3 in a dramatic Champions League quarter final. Bayern’s two away goals at Old Trafford made all the difference leaving United lamenting what might have been. 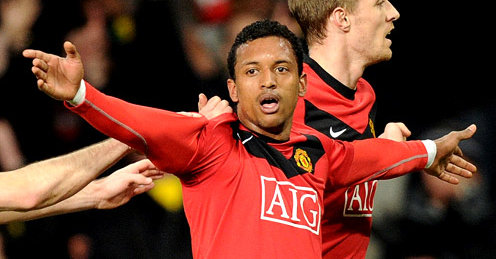 “Football, f*****g hell” was all Sir Alex Ferguson could say after the Nou Camp miracle back in 1999 and he must be saying the same thing now after Bayern Munich came back from the dead to eliminate Manchester United on away goals despite going down 2-3 in a dramatic Champions League quarter final. Bayern’s two away goals at Old Trafford made all the difference leaving United lamenting what might have been.

From a seemingly impregnable position, three goals ahead of Bayern Munich on the night and two in front on aggregate, the Red Devils’ world collapsed in a six minute spell either side of the interval. Bayern staged a stunning fightback to eliminate10 man United as Arjen Robben‘s late strike in the German side’s 3-2 defeat earned a 4-4 aggregate draw which put them through to the semi finals on away goals.

Louis van Gaal‘s side, who led 2-1 from last week’s quarter final first leg, looked dead and buried as Darron Gibson’s strike and two fine finishes from Nani put United 4-2 ahead on aggregate before half time. But Ivica Olic reduced the deficit just before the break and United defender Rafael da Silva gifted van Gaal’s team a significant break when he foolishly earned a second yellow card early in the second half. 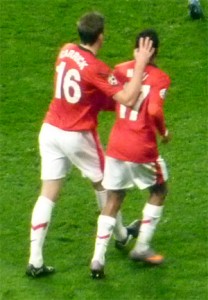 The Germans went for the kill and former Chelsea winger Robben’s brilliant finish was enough to secure a semi final showdown with French club Lyon and end United’s bid for a third successive final appearance. United manager Sir Alex Ferguson said after the game that United had been the better side across the two legs. “We played better today than they did in their own ground. Without the extra man they made the ball work and I thought we defended very well, it’s taken an exceptional strike to settle the tie,” he said  “We have done well, the performance was excellent, we were very unlucky”

After losing the lead in the Premier League to Chelsea at the weekend, United are now in danger of ending the season with just the League Cup to show for their efforts. With Dimitar Berbatov’s lacklustre performance against Chelsea still fresh in the memory, perhaps it was no surprise that Ferguson was willing to risk Wayne Rooney as United tried to overturn a first leg deficit for only the second time in seven attempts in the Champions League.

While United had their star man back from an ankle injury, it was Republic of Ireland international Gibson who gave United a dream start in the third minute. Rafael started the move by streaking away from Franck Ribery before picking out Rooney. The England forward laid off a perfect first time pass into Gibson’s path and, as the Bayern defenders backed off, the youngster lashed a fierce strike past flast-footed Bayern goalkeeper Hans-Jorg Butt for his first ever Champions League goal.

Bayern had barely recovered from that sucker punch when they were hit by another blow as Nani doubled United’s lead. In the seventh minute, winger Antonio Valencia teased Holger Badstuber on the right edge of the Bayern penalty area before whipping over a low cross to Nani, who timed his run pefectly and deceived Butt with a superb back heeled flick into the far corner.

United were dominant at that stage but Bayern wasted a chance to get back in the match when Thomas Muller’s pass released Olic, only for the Bayern striker to take a poor touch and allow Edwin van der Sar to save. Ferguson’s side looked to have wrapped up the tie four minutes before half time as Valencia surged away from two Bayern defenders before crossing into the penalty area for Nani to dispatch a sublime first time finish past Butt

Yet Olic gave Bayern a lifeline in the 43rd minute when he met Muller’s header with a fine finish that beat van der Sar from a tight angle. United were looking surprisingly shaky and Ferguson’s team still hadn’t steadied their nerves after half time. There was no immediate danger when Ribery pulled clear of Rafael just inside the United half, but the young right back, who had already been cautioned for dissent, showed his inexperience as he tugged at the France winger, earning a red card from Italian referee Nicola Rizzoli for his second booking.

Ferguson responded by sending on John O’Shea for Rooney to plug the gap in United’s defence, but Bayern went close as Ribery’s stinging volley forced van der Sar to parry with his fists. Substitute Mario Gomez went close with a glancing header that skimmed over the crossbar and the pressure finally told as Robben broke United’s hearts in the 74th minute.

Robben was unmarked on the edge of the penalty area as he met a corner with a magnificent volley past van der Sar to leave England without a Champions League semi finalist for the first time since 2003.

Did Silva’s red card destroy all hope for United?