Rooney is due to begin preparations for the World Cup next week so both United and his own advisers have agreed to postpone further contract talks to avoid distractions in the build up to England’s campaign. Despite the obvious risks of returning from South Africa with both his reputation and value enhanced, senior figures at Old Trafford are relaxed about the prospect of finalising his future in the weeks leading up to the 2010-11 season.

Although the 24 year old has two years remaining on his £90,000 a week contract at United, the club’s owners have given full support for moves by Sir Alex Ferguson and chief executive David Gill to secure Rooney’s services for the long term and reward him for his marked development and growing maturity over the past 18 months. 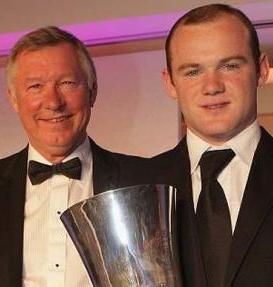 Rooney is expected to be offered around £150,000 a week which would mean he surpasses Rio Ferdinand as the club’s top earner by almost £30,000 a week. The player’s value has become evident this season with 34 goals in all competitions for the club. Although Rooney has consistently stressed his happiness at Old Trafford, Real Madrid have a growing interest in the player but the Glazers know that tying Rooney to a long term deal is central to their plans to keep United competitive at the top level of the game in England and Europe.

United’s negotiations with the Rooney camp will go much more smoothly if the club attract further reinforcements to add to the acquisitions of Fulham defender Chris Smalling and Mexican forward Javier Hernandez. With Rooney set to miss the club’s summer tour of the United States in late July following his World Cup exertions, contract talks are likely to accelerate in that period.

Rooney insists that he still retains a sliver of hope that he will end the campaign with his fourth successive Premier League winners’ medal. United must beat Stoke at Old Trafford on Sunday and rely on Chelsea failing to defeat Wigan at Stamford Bridge in order for the title trophy to remain in Manchester but Rooney admits the unlikely can still happen.

He said: “There’s still a slight hope in the league, we’ve worked hard this season and we’ve had a lot of injuries but we’ve still got a glimmer of a chance of winning it. We’ve lost too many games and now have to win against Stoke to have a chance. If Wigan can do us a favour that would be great but all in all we are disappointed with the way we have gone out of competitions this season.

“The FA Cup defeat to Leeds in the third round wasn’t good enough and as for the Champions League, I think we were a bit unlucky considering the way we started against Bayern Munich. I couldn’t see us losing that tie but we went down to 10 men at Old Trafford and they put us under a lot of pressure. We went out on away goals and it was hard to take.”

Meanwhile, Rooney believes he would not have scored a career best 34 goals for Manchester United this season had it not been for the £16 million summer arrival of Luis Valencia from Wigan. Sir Alex Ferguson’s reliance on the Ecuadorean international following Cristiano Ronaldo’s £80 million move to Real Madrid was widely perceived as a risk but Rooney has identified the winger as the key factor in his most prolific season to date.

“I could not have scored the amount of goals I have without him” Rooney said. “He has been great this year and the quality of balls he puts in the box for me has been unbelievable. My favourite goals have been the ones I have scored with my head, there is no question about that”

Should the club finalise contract talks with Rooney before going to South Africa?