Busby had succeeded in bringing a trophy back to the club five years after Munich. Manchester United had taken the first step on the long way back to the top..

The great 1958 tragedy at Munich had decimated a Manchester United team which Sir Matt Busby had been patiently building for a decade. If United were ever to bounce back, the rebuilding had to start in earnest so at the beginning of the 60s Busby started looking more and more into the transfer market. His famous Youth system was still several years away from producing the major players who were capable of challenging for honours so there remained little alternative than to open the cheque book.

First came Maurice Setters £30,000 transfer from West Bromwich Albion. When United showed interest Setters didn’t waste a minute in agreeing to join them and proved to be the man who put steel back into a defence that had been sagging. Next came Noel Cantwell, another £30,000 signing from West Ham who Busby appointed club captain. He was a rugged but stylish player who played several positions but settled at fullback.

Busby then turned his attention to the Arsenal centre forward David Herd who he had tracked for a long time. Busby talked to the Highbury club for two years about signing Herd and had all but given up hope when he decided to put in a casual call to them to find out the latest position and was told “you can have him for £38,000” Matt caught the next train to London to finally get his man.

United were beginning to build back into a great side but Busby knew there was still some pieces of the jigsaw yet to be put into place. He had long been an admirer of a young Scot he had first seen at Huddersfield and later at Manchester City. In 1962 the player suddenly became available following an unhappy stint in Italy with Torino and Busby wasted no time in securing the services of what was to become his greatest signing, the great Denis Law for £115,000. The resurrection was about to begin. 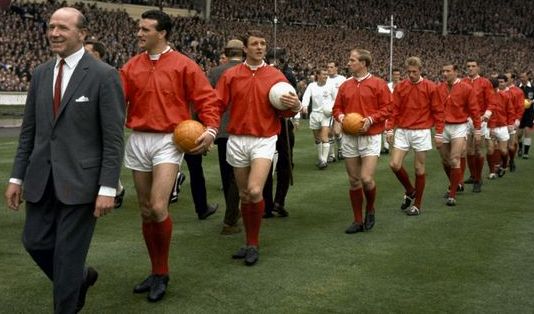 United came to Wembley on May 25 with a narrow escape from relegation just behind them. On the day, and for the great occasion, they at last found their touch. Busby’s new United team had been assembled at astronomical cost and was the most expensive team to play in a Final with more than £300,000 having been spent.

The first goal came on the half hour. Pat Crerand squared the ball to Law and completely in control, swung away towards the right then turned sharply back to hook the ball in. The goal merely confirmed United’s superiority and from then on they had the time and space to play with commanding ease.

Herd was on hand to score after Bobby Charlton’s effort had been too hard for Gordon Banks to hold and then, with only five minutes remaining, he banged in his second and United’s third after Banks had dropped Johnny Giles’ centre. Ken Keyworth pulled back a courageous goal for Leicester when they were 2 goals down, diving to head the ball only a foot from the ground.

Busby had succeeded in bringing a trophy back to the club a mere five years after Munich. Manchester United had taken the first step on the long way back to the top.

Were you at Wembley that afternoon? Share your memories with us