Kenny Dalglish and his role in Rooney’s career

In a sensational book about Wayne Rooneys meteoric rise up the ladder of English football, former Liverpool manager Kenny Dalglish is reported to have played a key role in persuading the Manchester United super striker to leave his agent several months before the then Everton player’s contract had been due to expire and sign with the Proactive agency where Dalglish had 2 million shares which at one stage were worth £860,000.

In a sensational book about Wayne Rooneys meteoric rise up the ladder of English football, former Liverpool manager Kenny Dalglish is reported to have played a key role in persuading the Manchester United super striker to leave his agent several months before the then Everton player’s contract had been due to expire and sign with the Proactive agency where Dalglish had 2 million shares which at one stage were worth £860,000.

Investigative journalist John Sweeney, author of the unofficial biography Rooney’s Gold, provides a detailed explanation of such events in a new book which was only published after Rooneys agent Paul Stretford tried to have it banned.

It tells the story of a boy from the mean streets of  broken Britain where few are meaner than those of  Croxteth in Liverpool. He was lifted out of poverty by his football genius to play for Manchester United and become an England hero on the football pitch.

Rooney was rough, working class and surrounded by hangers on including a questionable agent, a crooked lawyer and a few gangsters thrown into the mix. Rooney was a young media darling who became a villain overnight when it was alleged that he had been having sex with a granny hooker called the Auld Slapper even though there was no credible evidence that any of  it was true. 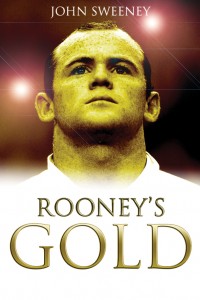 In the world of Rooney and tabloid media  anything goes. He ignored the gossip and carried on scoring goals, lots of them. He can be bad tempered and often uses bad language but overall nobody has ever doubted his passion for the game.

Rooney’s Gold looks at the characters who have been attracted to the fabulous money the Liverpool lad gets for kicking a ball. Some have tainted his gold and some will not enjoy reading this book which is a warts and all biography of England’s most famous sportsman but above all, it’s the story of a boy who despite all the forces pulling him down rose up to become a nation’s hero.

There can be little doubt that many Scousers would love to disown him but the fact remains that Rooney is one of Liverpool’s most famous sons. The boy who was born in Fazakerley Hospital and brought up in Croxteth could even, should Rio Ferdinand and Steven Gerrard get injured, and England actually play to their potential for a change, end up lifting the World Cup on July 11.

Author John Sweeney would love to see it because Rooney’s Gold is colourful, controversial and entertaining. It’s described as the uncensored life of the nation’s greatest footballer and the people who sought to exploit him. In an interview he gave to Liverpool Echo journalist Paddy Shennan, Sweeney does not hesitate to tell it as it is not least when he’s writing about Croxteth.

“You only go to Crocky if you turn off the East Lancs Road by mistake” he says and of its Western Approaches pub comments “Drinkers in the Wezzy treat strangers to their pub with a circumspection that can be chilling”. He then says while praising Rooney “Anyone who can get out of Crocky, fair play to them.”

Although his dismissive descriptions will wind up a lot of people other parts of the book, including the passages about former Sun editor Kelvin MacKenzie, will provoke cheers and applause. Sweeney says that “If you look at what happened at Hillsborough, the victims were blamed by MacKenzie and those responsible were essentially given a free pass, it was entirely the wrong way round and entirely unjust. With Hillsborough it is simple and straightforward. The Liverpool fans were wronged and MacKenzie has never seriously apologised for it”

Well said, though he knows that he will lose brownie points elsewhere when admitting “No, I haven’t dressed up Crocky in flattering terms and I don’t expect to receive an invitation from the Croxteth Tourist Board” But the Tranmere Rovers supporting author, who although born in Jersey comes from good Mersey stock, the son of Birkenhead born Leonard and Liverpool born Barbara stresses “What is great about Liverpool culture is its wit, its toughness, its sense of fair play and its excitement. Liverpool has got some beautiful buildings but when I think of Liverpool I think of somewhere that is full of life, wit and humour.”

Of  his book which, among others, won’t please Rooney’s agent Paul Stretford he says “It’s a general attempt to tell the story of  Rooney and to say that he’s a lion. A rough one, not a smooth one. It’s also an attack on Britain’s moronic celebrity culture, which I hate. The book has had a complicated history, it was pulled by the first publishers in 2007, then I went away and rewrote a lot of it”

“As I rewrote it” he continues “it became obvious that Rooney had changed. Although he had made a series of mistakes, the worst of which was being his deal with The Sun, my view is that it was a mistake made more by his agent than by himself. Wayne has changed and my understanding of him has changed. I do think he’s a genius, but for a genius to deliver he still has to work hard. He has shown tremendous application and discipline and for that you’ve got to give him credit.”

Then again, as Rooney’s Gold examines, his worst of times as well as his best of times, the footballer is unlikely to welcome it “I think Wayne would say ‘It’s my bloody life and I can write a book about it but I don’t bloody want anyone else to write one.’ But I’d say ‘This is a democracy!’ There are obviously stories out there he wouldn’t want to be in but in general, I think it’s fair to him. I have dealt with the devastating prostitute stories, which was a ghastly time for Wayne and Coleen but they got through it and fair play to them for that.”

“We know he’s not perfect but he’s not a bad man” he adds “he has done some great things and, should there be injuries to others, I would love to see him lifting the World Cup as the captain of England.”

And what are his hopes for the book? “I’d like people who have dismissed Rooney as a gum chewing yob to come away and think ‘He’s a bigger man than that.” He’s a complicated man with lots of demons and flaws but someone who has given us an enormous amount of entertainment and some laughs, including some terrible laughs at his own expense.”

In February I wrote a piece for the Echo asking whether it was time for Evertonians to forgive Rooney for his past sins and quoted the rapidly maturing man as saying “Everton is still a big part of my life and my family’s life . . .”

With regards to his former manager David Moyes he said “Things haven’t been good between us. I’ve said a few bad things in the past about him, but when I look back I see what he did for me. He helped make me the player I am today.”

Looking ahead Sweeney says “I think he could well end up going back to Everton” and he adds “I also think he would be a thumping good manager. Wayne really understands the game and he’s got that belief and aggression you need. We are uncomfortable with that but when you go into battle you don’t want your sergeant major running away at the sound of the enemy.”

Has the mainstrean media been fair to Rooney in the past?