50 years behind the scenes at Old Trafford

Have you heard enough about millionaire footballers? Are you sick and tired of reading about wild, baseless rumours on which player is coming or going? Here’s a story about a man who has seen it all at Old Trafford, first hand, for the last 50 years. Ken Ramsden went from office junior to ticket office manager, programme editor, press officer, assistant secretary through the ranks to club secretary. But Ramsden’s Manchester United journey is over and the Ordsall born son of a Salford foundry worker and an Old Trafford laundry lady has retired. It’s a fascinating story brought to life by Manchester Evening News Stuart Mathieson and is being reproduced here totally unedited.

Have you had enough of reading about millionaire footballers? Are you sick and tired of hearing about wild, baseless rumours on which player is coming or going? Here’s a story about a man who has seen it all at Old Trafford, first hand. For the last 50 years Ken Ramsden went from office junior to ticket office manager, programme editor, press officer, assistant secretary through the ranks to club secretary. But Ramsden’s Manchester United journey is over and the Ordsall born son of a Salford foundry worker and an Old Trafford laundry lady has retired. It’s a fascinating story brought to life by Manchester Evening News Stuart Mathieson. It is being reproduced here in its entirety, totally unedited.

50 years and out for Ramsden

From emergency teenager turnstile operator and toilet roll checker, to co-ordinating United’s smoothly run, emotional Munich commemorations. From watching United on a homemade fold up stool, to travelling the world and staying in five star hotels. Ken Ramsden went from office junior to ticket office manager, programme editor, press officer, assistant secretary through the ranks to club secretary. But, after 50 years, Ramsden’s Manchester United journey is over and the Ordsall born son of a Salford foundry worker and an Old Trafford laundry lady has retired.

It has been an adventure that took Ramsden from the austerity of United in 1960, when he had to buy the club’s office furniture from a second hand shop in Withy Grove, to the modern day Reds, valued at over a billion pounds. 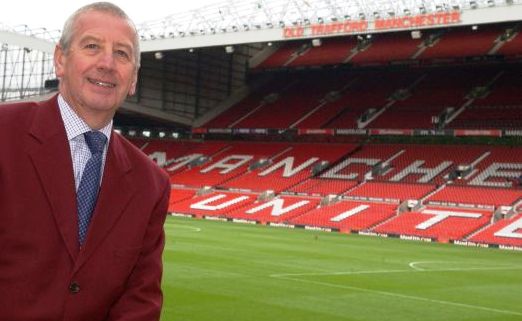 I spent part of Ken’s last day in his plush, spacious office at United’s Carrington training base. It is a far cry from those early days when the awkward 15 year old didn’t even have his own desk.

Mind you, he did start off in the Old Trafford boardroom!

“It was only used once a month for board meetings so I was handed a chair and plonked at one end of the table. The wages manager was at the other,” recalled Ken. Ramsden had had designs on being a printer, but was rejected because of poor eyesight.

His mother and auntie (Omo and Daz) were laundry ladies at Old Trafford. The pair had suffered the tragic job of washing the Busby Babes’ kit one week, then polishing their coffins the next following the Munich tragedy. United’s post Munich secretary was Les Olive, who lived in the same street as Reds fans the Ramsdens. When Olive heard that young Ken was looking for work he asked if he fancied an office job at the stadium.

Once it was rubber-stamped by Matt Busby and passed at a board meeting, his 50 year voyage kicked off at two pounds, three shillings a week.

“One of the first things Les Olive ever said to me was ‘Don’t ever let me hear you say that is not my job because whatever you are asked to do is your job’. It was a good lesson.

“Les himself would go round on a matchday and check that all the toilets had paper or the lightbulbs worked. We helped and you’d go round all the turnstiles reading the meters.

INDUCTION – “In my first season we played a night game against Everton and I was helping out in the cash office, we were a gatemen short and I was sent out at 15 years of age to operate one. I had been through many times but never worked one. I got a quick induction on which pedal to press”

“I did the payroll and bookkeeping. The maximum wage was in operation when I came. We paid the players weekly in cash.

“On a Thursday morning we went to the bank and then made up their wages in individual brown envelopes. Bobby Charlton, Denis Law they all got it the same way. Even in the summer they still came in for their wages because their wives needed the housekeeping!

“It makes you appreciate the differences. People who have come into the game in the last 10-15 years think it was always like it is now. But it wasn’t. The club was really poor in those days. If we had an adding machine we thought we were doing well! Hours were long when I moved into the ticket office and when we were busy for say, cup finals, stewards would volunteer for the price of a cup of tea and a butty to come in and help.

“You look at changes like European football. In 1968 the European Cup at Wembley against Benfica was purely and simply a football match. Now the Champions League is a circus. It is a fantastic circus and wonderful to be part of it, but it is a circus.”

Ramsden began his United career during the Busby era and ended it during Sir Alex Ferguson’s golden period.

He believes the two Scots epitomise what he hopes is how the football worldview of Manchester United.
“Fergie and Busby are both very humble men,” Ken added.

“I really, really think that United is a humble club. I know there are those outside who think there is an arrogance about the club but I truly don’t think that is the case.

“This club spends a huge amount of time considering the needs of supporters and considering what is the right thing to do and the best way to do it.

“When we work in Europe the people who want to talk to me because I am from Manchester United is incredible. They want to be with someone who is from the club. That is a very humbling experience.

Fought – “My background is such that you don’t try and give the impression of arrogance. There are clubs who are seen as arrogant and I have fought tooth and nail to make sure United are not looked on in that way.

“People may not like us but I would hate to think they thought we think we are better than we are. I don’t think it is an accusation that could be levelled at us. To have worked at the club during the two lengthy periods of success is great and to work for two such men has been a wonderful experience.

“Sir Matt was fantastic. I was only a boy at the time and he would phone me up and he’d tell me to bring the tickets over to his office.

“I never needed to knock because my knees did it for me! I was absolutely terrified of him because of who he was. But he was a man who looked after the laundry ladies and tea ladies. He made everybody feel important.

“He had this knack, and I have watched him in action, of speaking to someone who he might not have met say for 20 years and they were convinced he remembered them. It made them ten foot tall. He got everyone on his side.

“He was also a psychologist long before there was psychology in sport. There was once a European game and our full back Tony Dunne was in the treatment room. Tony was never usually injured but he was having treatment from Ted Dalton. The boss asked Ted how Tony was and Ted replied that he had no chance.

“The boss then went over to Tony and said to Tony “I know you won’t let me down son” and he walked out! Tony played the next match! Sir Matt had that way. He was very, very clever. He knew people and got the best out of them.”

Fergie’s arrival in 1986 wasn’t immediately successful but Ramsden prayed he would navigate the rough waters.

“When Alex came the thing I admired most was that I always felt he was planning beyond his own time. He was sowing for others to reap.

“He was looking at young players from 12 upwards and those boys wouldn’t get to the first team until seven or eight years. The likelihood was that it was a bit remote he might still be in charge then given how managers came and went even then. Obviously he wanted to stick around but it wasn’t likely. The fact he was planning for someone else’s benefit had an enormous impact on me on what he was really about. It wasn’t about him it was about the club.

“There was a desperation for him to do well because very quickly everyone at the club saw what he was like and his honesty and hard work.

“He wanted the best for the club. Previous managers had just looked after the first team. That was the bread and butter but Alex knew better. He looked deeper. He made sure everything from the very bottom was sorted and he re-jigged and put things right and everything flowed from there.

“I am so pleased he saw the fruits of his labours.”

As a fan Ken’s best memories are of the 1999 Treble season, but as an employee he has other highlights.

Fantastic – “I was heavily involved in delivering the Champions League final here at Old Trafford in 2003. It was a fantastic operation and something we were all extremely proud of” he added.

“Then there was the occasion after Sir Matt died and we played Everton. We were debating what we should do as a club and there is no manual that tells you want to do.

“We had DJ Keith Fane at the time at Old Trafford who rang me on the Friday before the game and said he had an idea. He was very creative and suggested we got a piper to lead the teams out.

“I said no way because it was too twee but he insisted it would work. I believed him and went with it and oh boy did it work. There is an invisible mark you have to hit and you don’t know how you hit it, but when you do you know. We were so pleased.

“It was the same for the 50th anniversary of Munich in 2008. I was so pleased to be secretary at that time. It was a lot of work but it was a lifetime love for me to try and do my best for the club and do the best for the families. It was challenging but I think we pulled that off as well. It was a very proud moment especially because of my mum and auntie’s connection with the club at the time of Munich.”

The Ramsden name will live on at Old Trafford with his son David who is an Old Trafford Museum Guide. He was born hours after Ken and his wife had attended a United reserve night match!

“It has been an incredibly demanding career, but a real labour of love.”

There must be many people who has spent 50 years of their lives working in just one job but few would have spent all that time at one of the world’s greatest football clubs. What memories, what stories Ken must have to tell his grandchildren!

Have you ever had any dealings with Ken Ramsden during the last 50 years?