United and the new increase in PIK Interest

Reports have surfaced recently indicating that the interest rates on Manchester United’s infamous PIK loans have increased from 14.75% to 16.75% because of an inability to repay funds owed to Citadel, Och Ziff and Perry Capital (the three hedge funds with whom the debt was originally taken out), as specified in the terms of United’s debt restructuring back in 2006. So what does this mean for United? Is the price to pay for this situation a scaling back of investment in new players or price hikes as we fans often fear? It’s probably best to start from the beginning to see where this could lead to.

Reports have surfaced recently indicating that the interest rates on Manchester United’s infamous PIK loans have increased from 14.75% to 16.75% because of an inability to repay funds owed to Citadel, Och Ziff and Perry Capital (the three hedge funds with whom the debt was originally taken out), as specified in the terms of United’s debt restructuring back in 2006. So what does this mean for United? Is the price to pay for this situation a scaling back of investment in new players or price hikes as we fans often fear? It’s probably best to start from the beginning to see where this could lead to.

As part of the Glazer’s £790m leveraged buyout of United back in May 2005, the majority of the required funds were borrowed from international banks, such as JP Morgan, with a further £265m borrowed from the three aforementioned hedge funds in the form of PIK loans. These loans, which accumulate compound interest, are due for repayment on maturity in 2017, and are often used in leveraged buyouts to reduce cash expenses. Due to the eye-watering interest rates, you would expect most firms to try and pay off these debts as soon as possible.

Because of the refinancing package that the club implemented back in July 2006, the Glazer’s were able to pay back some of the PIK liability, reducing the value of that debt to approximately £175m, with the remaining £500m being in the form of a debt facility with JP Morgan and other international banks. As reported by the BBC at the time, this saw loan charges fall from £90m to £62m, with the interest rate on the bank loan (based on the LIBOR) being around a very competitive rate of 5.5%. For the year ended 30th June 2009, however, the accounts show that total interest payments for the club had risen to approximately £70m due to rising interest rates on the bank loans.

Therefore United underwent a £504m bond issue in January 2010, effectively swapping one type of debt for another, with the interest rate on the senior debt facility with the banks having risen to 8%. Bonds are essentially IOUs to investors, where the investors are paid back their money plus an interest rate at a specific date. As reported by The Telegraph , this was undertaken by United because, under the terms of the 2006 restructuring, the bank lenders would have a say in running the club if certain financial targets weren’t met. Therefore the bond issue gave United greater financial security in the long term, paid off nearly all of the outstanding bank debt and resulted in an annual interest bill on the bonds of £45m, with the seven-year bonds maturing on 1st Feb 2017.

But this meant that the PIK debts still remained, and as reported by Business Week, the current accrued value of the PIK loans is £200m. Current developments mean that this will now rise to £267m by June 2011, and to a further £310m a year later. David Gill has often said that the PIKs have no recourse to the clubs assets as they were agreed by Red Football Joint Venture Ltd, a Glazer holding company, but ultimately it is United’s cash that will be used to pay off these debts. 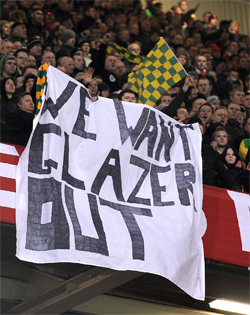 As reported by Panaroma just before the World Cup, United had paid £426m in interest charges and bankers fees under the Glazer’s tenure up to that date, and the BBC now reports that the current situation means annual payments on the PIK loans will increase from £25m to £38m. As well as the Glazer’s £10m drawing from the club in 2008 which caused so much protest, The Independent reports that the bond issue allowed them the option to take out a further £95m from the club. When one considers the fact that half of their 64 shopping malls in the US under their First Allied Corporation are on the banks watch list (i.e. the banks are worried about getting their money back), and that they have £570m of debt on their shopping malls and a £100m mortgage on the Tampa Bay Buccaneers, you can’t help but feel that United are the cash cow that are propping up the Glazer’s crumbling empire.

But this doesn’t mean United are going to “do a Leeds” as so many of our rival fans like to predict. United’s last published accounts, for the year ended 30th June 2009, showed a net cash inflow from operating activities of £111m, and if you take the worst case scenario where you exclude any transfer dealings and include all the interest payments, we still achieved a net cash increase of roughly £35m. Include transfers and other borrowings, and our cash position increased from £50m to £150m. There’s no denying the fact that when Fergie has wanted to buy players (Berbatov, Valencia, Smalling, Hernandez, Bebe), the money has been available, and considering we’ve just had a World Cup (which tends to cause players to be overvalued) and the likes of Man City and Real Madrid are inflating the market, it makes sense when he says there is little value for money out there.

However, these figures were on the back of three consecutive league titles and winning the Champions League a year earlier. United’s only success on the field for 09/10 was a solitary Carling Cup, and one could argue that this wouldn’t  have been the case were we able to afford to hold onto players such as Carlos Tevez, who would have been invaluable towards the end of the season when certain games were drawn and lost. With the resurgence of Chelsea and inevitable rise of Man City, it’s unfortunate that it seems that the only way we can prevent decline is to also benefit from some sort of footballing philanthropist. Despite what you may think of the Glazer’s though, they’ve turned United into an even more profitable company (if you don’t include the interest payments of course). You can’t blame them for coming in and raising ticket prices, a full stadium indicates potential revenue foregone as it shows that people were willing to pay more than what was being charged at the time.

But there’s no denying that, overall, the Glazer’s are bad for the club. People may cite our success under their reign as proof that they’re not as bad as people make out, but to do that is to confuse correlation with causality. Our success of the last few years is not because of them, it’s because of people like Fergie and Ronaldo, but now our opponents have got their arses in gear the future isn’t looking as rosy. The interest payments are up, trophies are down, and surely that only means less money for future investment in players. Whilst I have high hopes for the squad this season, I can’t help but feel that we’re currently achieving more than one would expect based on the circumstances that we have fallen victim to. Eventually, it’s going to catch up with us, and all the Fergie’s in the world won’t be able to stop it.