What a difference twelve months can make! It was only this time last year that calls for Sir Alex Ferguson to show Nani and Dimitar Berbatov the Old Trafford door were growing louder. Yet apart from each grabbing a spectacular goal on Saturday, they turned on a performances which had ‘class’ written all over it. Together with veteran Paul Scholes they ran the show in a game that United never looked like losing.

What a difference twelve months can make! It was only this time last year that calls for Sir Alex Ferguson to show Nani and Dimitar Berbatov the Old Trafford door were growing louder. Yet apart from each grabbing a spectacular goal on Saturday, they  turned on a performances which had ‘class’ written all over it. Together with veteran Paul Scholes they ran the show in a game that United never looked like losing.

The only concern in an otherwise polished display was the amount of goalscoring opportunities which continue to go begging game after game. Both the Hammers and Newcastle could, and should, have been beaten by twice the margin this season while the failure to take the chances created at Craven Cottage proved costly. It’s a waste that Ferguson will certainly be having a serious look at. 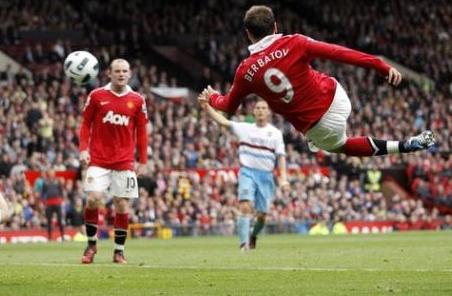 The Guardian – This was not so much a comfortable victory as a cashmere covered one over a West Ham side that have lost their first three Premier League matches and struggled to overcome Oxford in the Carling Cup. Not since 1977 have West Ham started a season this badly, and that campaign culminated in relegation. Only in the universe that surrounds Wayne Rooney could this summer be called a drought. Until he converted a first half penalty the most naturally gifted footballer Old Trafford has seen since Bobby Charlton had not scored in more than 18 and a half hours of competitive football.

Only in terms of statistics and headlines was Rooney the game’s outstanding figure. Nani was constantly threatening, while the most exquisite goal was the falling volley from Berbatov who has eclipsed his strike partner in the opening matches. “He and Paul Scholes orchestrated most of the football” Ferguson said “Nemanja Vidic put in two fantastic tackles, one in each half. It was a great team effort but we should have scored more.”  Full Report

Manchester Evening News – Wayne Rooney ended his goal drought as Manchester United turned on the style to down West Ham at Old Trafford. Rooney, who hadn’t scored for club or country since March, netted a first half penalty after Ryan Giggs had been fouled in the box. Five minutes after the break Nani did find the back of the net. Fine interplay from Scholes and Rooney set the Portuguese star free and after a neat sidestep he slammed a left footed shot into the goal.

The Hammers kept going and Kieron Dyer, one of the visitors’ more lively performers, hit the outside of the post. But it was a brief moment of light for West Ham, as United poured forward at will with pace and movement. Sure enough, the third came in exquisite style. John O’Shea cut the ball back to Nani in the box, who clipped a cross to the far post where Berbatov slammed home an acrobatic volley from close range. Full Report

Daily Telegraph – Beseeched by the Stretford End to make his breakthrough, Wayne Rooney finally delivered. After 18 hours and 34 minutes of bitter frustration, encompassing a sudden slump for his club and a miserable World Cup for his country, the Manchester United striker had relief written across his face as he dispatched the penalty that broke his protracted goal drought.

Nani was energised in the second half, exchanging a neat give and go with Rooney then left the hapless Gabbidon in a heap before firing a gorgeous goal from the edge of the area. The winger, having flattered to deceive since his move from Sporting Lisbon two years ago, could be on the cusp of a memorable campaign. Berbatov, likewise, did not wish to be a wallflower as the United party started. Again Nani was the pivot in a clinical United move, clipping the ball across to Berbatov at the far post where the striker coiled his body acrobatically and let fly with an agile volley. Full Report

Comment…Is it REALLY so offensive for a player to take off his shirt when celebrating a goal as Berbatov did? There are so many other incidents which are far worse without being punished with a mandatory yellow card that it makes one wonder if the authorities have got their priorities right.

Should Nani or Valencia play on the right flank?