“The more things change the more they remain the same” is a saying which has been around since Adam was a boy. I have no idea where it originally came from but it’s difficult to argue against the truth in it. An entry in the Sunderland Fan Blog which explains how all the grand plans of a club that became known as “The Bank of England” came so close to ending in disaster will send shivers up and down the spine of Manchester United’s cross town rivals and raise questions whether history may be on the verge of repeating itself.

It’s obviously much too early to make any meaningful predictions but although we are talking about another era, indeed, an entirely different world, the similarities between Sunderland’s determined attempt to ‘buy’ a championship in the early 1950’s and the efforts of Manchester City to do the same today are eerily uncanny.

The famous Wearside club had been crowned First Division Champions in the 1935-36 season and won the FA Cup the following year but had won nothing else since. Arch rivals Newcastle United had meanwhile twice lifted the FA Cup in the 1950-1951 and 1951-1952 seasons at a time when it meant far more than it does today. Sunderland were therefore desperate to match their neighbors success and left no stone unturned in their efforts to bring the Championship back to Roker Park. This is how the Sunderland Fan Blog recorded those events from half a century ago. 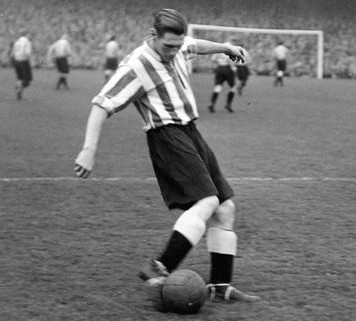 It was believed that these three players alongside the current stars would end the bad days at Roker. Other players signed included Joe McDonald from Falkirk and Ken Chisholm from Cardiff. The Board even tried to sign Jackie Milburn from Newcastle but were snubbed despite Milburn’s interest in a move to link up with his old pal Len Shackleton (pictured)

Many clubs were becoming envious of Sunderland and the club became the target of abuse from others who were saying that Sunderland’s financial spending was too excessive and harmful to the game. Every team throughout the country wanted to beat Sunderland – similar to Liverpool 70’s 80’s and Manchester United 90’s 00’s.

Amazingly Sunderland lost 4 of their 5 opening games. They had no problem scoring but couldn’t stop conceding goals as well. After 10 games Sunderland had just 7 points from a possible 20. Another three defeats followed, including a hammering by Preston 6-2 and the lads were bottom of the table. Trevor Ford was sold to Cardiff for a fee of £30,000.

Stories from older supporters suggested that Ford and Shackleton struggled to get on with each other and this caused a rift within the team. Not put off by signing players Sunderland purchased Ted Purdon from Birmingham for a fee of £15,000. Sunderland escaped relegation by the smallest of margins by drawing 0-0 away to Middlesbrough, beating Sheffield United 3-1 and Burnley 2-1 in their last three games of the season. Other teams around them failed to pick up enough points and Sunderland were safe.

As it turned out, Sunderland made a comeback of sorts the following year finishing in fourth position one point ahead of Manchester United but the revival was short lived. The club was relegated to the second division in 1957-58 and as the Sunderland blog put it “After 68 years continuous membership of the Football League’s top flight The Black Cats bowed out of the 1st division. We didn’t know it then, but it would be 40 years before our rehabilitation was complete and we were in a position to compete with the best in England.”

Just like Manchester City decided to create it’s recent ‘Project’ to bring silverware to the club, Sunderland had it’s own sixty years ago which sadly ended in abject failure. Without wanting to appear as if the same fate is wished upon our friends at Eastlands, ‘The Bank of England’ story is yet another example that long term success cannot simply be bought. It needs to be nurtured over a long period of time…just like Manchester United has done since the early days of Sir Matt Busby.

Is the splashing of millions the best way to get success?