This is a confession from an unashamed Eric Cantona tragic. There must have been millions of words written about the man known as ‘Dieu’ and given half a chance I would have read every single one of them. I simply cannot get enough of the great Manchester United legend. Some of the people reading this may think otherwise but I doubt if there are too many United fans who would. When Four Four Two magazine recently published this piece by Andy Mitten therefore, there was never any question that it had to be shared. My apologies to anyone who may have read it before. If not, you can be guaranteed to enjoy it.

This is a confession from an unashamed Eric Cantona tragic. There must have been millions of words written about the man known as ‘Dieu’ and given half a chance I would have read every single one of them. I simply cannot get enough of the great Manchester United legend. Some of the people reading this may think otherwise but I doubt if there are too many United fans who would. When Four Four Two magazine recently published this piece by Andy Mitten therefore, there was never any question that it had to be shared. My apologies to anyone who may have read it before. If not, you can be guaranteed to enjoy it.

The ultimate Manchester United cult hero – “My best moment? I have a lot of good moments but the one I prefer is when I kicked the hooligan.” Eric Daniel Pierre Cantona gives his verdict thus on his time at Manchester United. Curiously, in one sense, many of those United fans who were besotted by Cantona during his five tumultuous years at the club might agree with him. His leap into the crowd and into the chest of a spectator berating him at Selhurst Park in 1995 was the defining event for United’s supporters in the 90s. It polarised football not just in England but around the world. 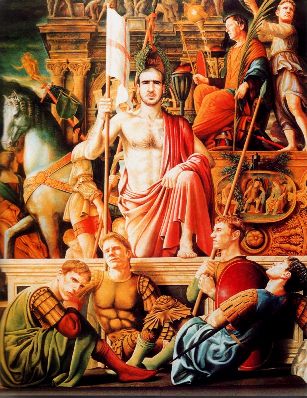 You were either against Cantona or with him. And for some the adoration which they had felt the minute he first strutted onto the Old Trafford turf, collar turned up, chest puffed out, holding himself ramrod straight, ratcheted up several notches to the point of blasphemy. Cantona was now United’s ultimate Red Devil, rebel supreme, the new Demon King of Old Trafford or simply ‘Dieu’. When he returned from his ban, fans paid for a billboard on the forecourt at Old Trafford saying: ‘We’ll never forget that night at Selhurst… when you buried that 30 yard screamer against Palace.’

“I remember it,” Eric says “and I remember the goal. It was against Wimbledon. They played at Selhurst Park too. I liked the words on the poster. And I liked it when I was in court and the fans supported me. They travelled from Manchester in the middle of the week to Croydon. I could feel that support and it helped me a lot. The club also supported me. So I stayed.” The FA imposed ban was harsh, with Sir Alex Ferguson’s saying: “I don’t think any player in the history of football will get the sentence he got – unless they had killed Bert Millichip’s dog.” Millichip was then FA chairman.

Cantona was speaking in Marseille on Bastille Day while thousands fill the streets in celebration, the air a pungent mix of the sulphur from spent fireworks and the salty spray from the sea. I’d driven to see my favourite ever playmaker mid-summer, when Marseille’s brilliant white urban sprawl was in vivid contrast to the azure sky.

Cantona is taller, wider and more imposing than you’d might imagine. Formidable bushy eyebrows frame his dark, impenetrable eyes. His gaze is direct, but also guarded and wary as he weighs up the strangers around him.

In current football parlance, everyone is a legend and the words ‘charisma’ and ‘aura’ have been debased by too frequent and unwarranted use. But not in this case. Cantona is a magnetic, commanding personality to the point of being, frankly, a little frightening. 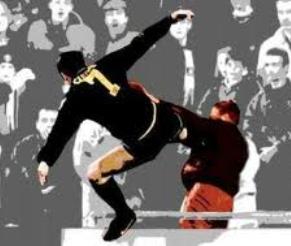 What has become forever known as the ‘Kung Fu Kick’ is almost a Kennedy assassination moment for United fans. I can recall exactly what I was doing at the time. I was in the crowd, midway up the Arthur Wait Stand which was full of Reds. As the game went on, I couldn’t take my eyes off him. He seemed to be seething inside, full of resentment.

When he was sent off, Cole rushed up to the referee and told him exactly what he thought. Eric walked off, turning down the collar of the black United away strip. The next minute it was bedlam, and most of us didn’t know why. When the story of what had happened next filtered around the ground there was palpable disbelief among United fans.

Cantona was, and remains, unrepentant. “I did not punch him strong enough” he says with regret “I should have punched him harder. I didn’t watch it after on television because I knew. All I had was journalists around my house. That’s all I could see. My house was small. They blocked the light.”

Alex Ferguson summed up the Frenchman’s appeal. “If ever there was one player, anywhere in the world, that was made for Manchester United it was Cantona. I think because he had travelled to so many different countries. There’s a bit of a gypsy in some people. He’d been searching all his life for somewhere he could look at and feel: this is my home, and when he came here he knew: this is my place. You could just tell.”

Eric’s arrival caused a stir in the dressing room that never really settled. David May remembers it vividly. He had not been at Old Trafford long and was just getting to know his new team mates before his first away game. “I was in awe of Eric and so were all my family” explains May. “I wasn’t rooming with anybody. Pally and Brucey were together, Denis and Keaney, Incey and Giggsy. So I was on my own.”

Still considering himself an outsider, May went to his room and lay on one of the two double beds. Then he heard a click and saw the door open. “Eric walked in” recalls May “I was thinking ‘Oh my God, I don’t need this. I’m rooming with Eric.’ May was polite and tried not to appear star struck. “I later went for dinner, but didn’t know what time to return to my room. It was all about what I thought Eric would want. Should I go back early or late? Be loud or quiet? So I went back early and sat on my bed watching TV.”

Cantona lay on the bed across from May. Aged 28, he had become used to the anodyne features of four star hotel rooms. He was already at his eighth club and knew the life of a professional footballer well, the hours in soulless hotels, the pranks, the expensive phone calls to family. The conversation in the May – Cantona bedroom was hardly flowing, so May duly called home.

“I rang to say hello and ask my family how many tickets they wanted for the game” he recalls “our Pete answered. He was excited about me playing for Manchester United and asked who I was rooming with. I’m with Eric’ I said quietly, trying to sound like it was the most normal thing in the word. ‘Dad!’ Pete screamed ‘Dad! He’s with Eric! He’s with the King!’

“Eric was lying on his bed and heard everything” adds May “he just smiled and carried on watching television. I looked across and just shrugged my shoulders.” If the players were in awe, what chance did us fans have?

When the Frenchman arrived, United had not won the championship in 26 years. When he left, retiring at his peak, before any hint of physical deterioration could diminish the legend, the Old Trafford trophy room had needed major extension work to accommodate the trophies he had inspired the team to win.

Along with all the others who worshipped him to the point of idolatry, I will always consider Cantona the most inspiring, infuriating and inventive playmaker I have ever seen in United’s colours.

Was there ever a more influential player in the whole of the Premier League?