The horrific injury suffered by Antonio Valencia at Old Trafford on Tuesday night brought back memories of a similar incident involving former Manchester United midfielder Alan Smith at Anfield in February 2006. Smith broke his leg and dislocated his ankle while attempting to block a free kick from Liverpool’s John Arne Riise, an injury described by Sir Alex Ferguson at the time as “one of the worst I’ve seen”. Valencia’s misfortune reminded Sir Alex of Smith when he said after the Rangers game “It is a bad blow for the boy. It is similar to the injury Alan Smith got and you are talking about the rest of the season.” manutd.com published an interview a couple of years back in which Smith talks about that horrible day.

How difficult was your battle for fitness?
All the physios have been great with me all summer. Getting up and coming in every day when everyone else was off was difficult, but my aim was to be back as soon as possible for the start of the season, and I wasn’t far off. Ever since I suffered my injury I’ve had positive feedback from everyone. 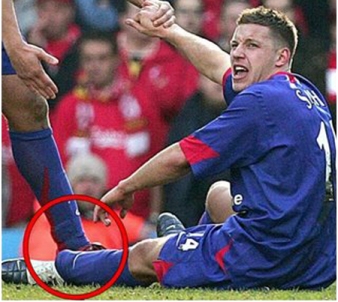 The great thing the fans wouldn’t have seen is how positive you’ve been right from the off. The day after your operation you were sat in your hospital bed talking about when you were going to play again…
I think that once it’s done you can’t go back, nowt can change that injury. The lucky thing for me, and I said this to my mam and dad at the time, is that I had the right people in the right place at the right time.

On the Sunday afternoon after the injury I had my leg all back in place, all fixed up and on the mend, and you can’t ask for much more than that. From that day onwards I had a positive aspect on it, and I think the sooner you can get doing summat to take your mind off it, that helps as well. It’s not much effort to come in, work with good people and get yourself fit.

Obviously you knew the injury was serious but straight away you were looking forward…
I think it’s good to have a target, and everyone for me was saying it would take 9-12 months to come back, and if you’re back by Christmas you’ll be doing well. In terms of that I’m miles ahead of schedule, but the last few weeks with the physios have been vital to me, just to build up my reaction and build up my calf muscles to what they were. This is the time where you can’t neglect what you’ve done, including all aspects of your training to help you get fit.

From the moment you got in that ambulance at Anfield, wherever you’ve been, and we include some people in Liverpool with this, the support you’ve had has been phenomenal.
Yeah, it’s been overwhelming to be honest. There was a lot written and a lot said about Liverpool fans but on my behalf and everyone who knows, there was never any malice that anyone did. I can’t speak highly enough of everyone, I got millions and millions of letters from football fans all round the world, and I’d like to thank them all for the positive thoughts and the letters they took time to write. I’m just sorry I can’t reply to all of them but we’re working through that! But they came from every club, rival teams, everyone. It was phenomenal.

After the Carling Cup final victory the lads took their shirts off to reveal a message to you. Did you have any idea that was happening?
Not a clue, no. To be fair, if I couldn’t have been there that was the second best thing, and to see them lifting that trophy with those shirts on meant so much. People forget I’ve only been here two seasons, this is the start of my third season, and it just showed how much everybody thinks of you, and that can never be taken away.

I didn’t have a clue it was coming, I was sat at home with my mates and my girlfriend and I thought ”what’s going on here?!” I had a little lump in my throat if I’m being honest. To see the reaction from the lads was unbelievable.

Smith managed to overcome that injury and is back in the Premier League with Newcastle United. There are many months of hard work ahead for Valencia but everyone will be hoping that he will eventually have the same happy outcome.

Do you expect Valencia to play again this season?