Was this the reason why Keano left United? – “Just because you are paid £120,000 a week and play well for 20 minutes against Tottenham you think you’re a superstar” Keane said about Rio Ferdinand. He attacked seven of his teammates in an interview with MUTV.  Sir Alex Ferguson’s insistence ensured that the interview would never see the light of day.

Apparently there’s more to this story. Ferguson ordered a team meeting and told Keane he’d brought the club into disrepute. Keane’s response was “And what about you and all your Rock of Gibraltar shite?!”  You can only imagine Fergie’s reaction to that comment. Ciao Roy. 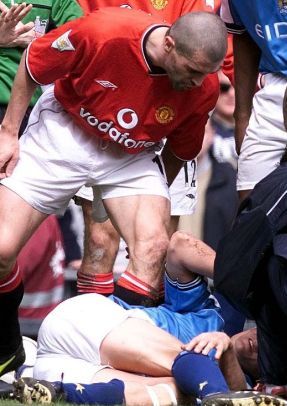 Keane never forgot Alf Inge Haaland – “I’d waited long enough. I fucking hit him hard. The ball was there – I think. Take that you c***” he recalled in his autobiography in 2002 “and don’t ever stand over me again sneering about fake injuries. And tell your pal David Wetherall there’s some for him as well. I didn’t wait for Mr Elleray to show the red card. I turned and walked to the dressing room.

It must have been Keano’s nastiest moment. He initially only received a £5,000 fine but that little paragraph in his book cost another £150,000 and a five match ban. Haaland retired through injury, ironically, due to his other knee.

Keano’s prawn sandwiches – “Sometimes you wonder, do they understand the game of football?”  he splutters  “we’re 1-0 up then there are one or two stray passes and they’re getting on players’ backs. It’s just not on, at the end of the day they need to get behind the team. Away from home our fans are fantastic, I’d call them the hardcore fans but at home they have a few drinks and probably the prawn sandwiches. They don’t realise what’s going on out on the pitch. I don’t think some of the people who come to Old Trafford can spell ‘football’ never mind understand it.”

It’s hard to imagine what Keane would be like if he played for United today. Old Trafford is awash with prawns since the Glazers starting forcing out proper fans with their ridiculous season ticket increases.

Players are nothing more than ‘Pieces Of Meat’ – Jaap Stam was sold by Manchester United to Lazio in 2002 and Roy was, once again, not happy. Hence another Keano philosophy “His transfer to Lazio illustrates how little power footballers have in the game. Contracts mean nothing” he fumes “Jaap has discovered that to football clubs, players are just expensive pieces of meat. The harsh realities remain and when a club decide they want to sell there is little you can do once the wheels are in motion.”

Keane found that out himself a few years later when Sir Alex had had enough of his little Irish Rottweiler.

When big Jack Charlton was lost for words – The Republic of Ireland were allowed a night on the tiles after a friendly with the USA team in Boston in 1991. With the team set for departure at 7.30am the next morning a teenage Keane kept the team waiting on the bus until 8.00am.

A furious Jack Charlton barks “Nineteen years old, your first trip, do you have any idea how long we have been waiting?” Keane replies “I didn’t ask you to wait, did I?” I bet big Jack didn’t know what had hit him.

Pissed off with the 2002 World Cup – Keane was unhappy with pretty much everything to do with the Republic of Ireland’s preparation for the biggest football tournament on Earth. The training pitch, the travel, the airport! No one was safe, be them abstract or concrete. I wouldn’t be surprised if he complained that the water was too wet or the ball was too round.

This led to a huge row with Ireland coach Mick McCarthy. When McCarthy was still playing for Ireland Keane told McCarthy “Mick, you’re a liar… you’re a f***ing w**ker. I didn’t rate you as a player, I don’t rate you as a manager and I don’t rate you as a person. You’re a f***ing w**ker and you can stick your World Cup up your arse. The only reason I have any dealings with you is that somehow you are the manager of my country! You can stick it up your bollocks.” Why doesn’t Keano really say what he thinks? Classic.

Economy Seats Priority – In 2001 the Irish thrashed Cyprus 4-0 in an impressive performance but Keano still found something to complain about. This time he was unhappy with – the seating arrangements on the plane.

“Where we trained last Monday in Clonshaugh was abysmal and it has been for as long as I’ve known it” he said “I was fairly critical about our seating arrangements on the flight out here when the officials were sitting in the first class seats and the players were sitting behind. For me that’s simply not right and it’s not just because I’m playing for Manchester United. The priority has to be the team and I don’t think that has always been the case here.”

Has there been a better United captain since Keano?

1 thought on “Was Keano Manchester United's best ever captain?”