While Manchester United can rightly feel that points were frittered away in earlier visits to Goodison Park and Craven Cottage, the one picked up from Michael Owen’s equalizer within a minute of coming off the bench at the Reebok Stadium was undoubtedly a point salvaged. To claim otherwise would only be an insult to a resilient Bolton Wanderers side who must have thought that a famous victory was within its grasp. Despite enjoying a 66% share of possession, United were unable to create anything resembling clear cut opportunities as Bolton closed down and unsettled their opponents for the whole ninety minutes leaving the likes of Wayne Rooney and Dimitar Berbatov totally frustrated.

Manager Sir Alex Ferguson must be concerned at the seven goals conceded in just three away matches and would be looking at Chris Smalling to partner captain Nemanja Vidic in the middle of the defence whenever Rio Ferdinand is so ever increasingly unavailable. The forced replacement of both Rooney and Ryan Giggs with injuries that puts them in doubt for Wednesday nights Champions League visit to Valencia must also be a worry for Ferguson. 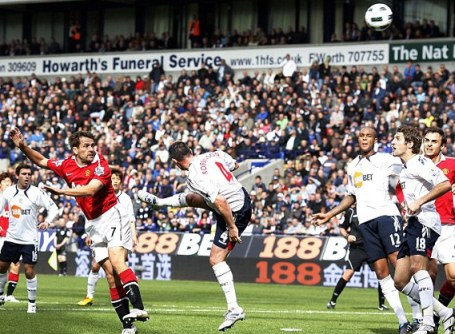 Daily Telegraph – Michael Owen scored the 200th goal of his club career to rescue Manchester United from defeat against Bolton Wanderers at the Reebok. Owen, a 70th minute replacement for Darren Fletcher, scored with a clinical header after Martin Petrov’s strike had appeared to set Bolton on course for victory. Despite maintaining their unbeaten start to the season, however, United struggled to impress and Wayne Rooney endured another miserable afternoon before being substituted on 61 minutes.

United had been given a tremendous incentive to claim all three points at the Reebok with title rivals Chelsea and Arsenal both losing 24 hours earlier. But if Sir Alex Ferguson’s players arrived at the Reebok expecting victory to be a formality, they would have been shaken out of their complacency by Zat Knight’s sixth minute opener. Full Report

Manchester Evening News – Michael Owen rescued a point for United after Sir Alex Ferguson’s men twice had to come from behind against Bolton at the Reebok Stadium. Owen nodded home Nani’s free-kick 16 minutes from time to ensure the Reds did not join the other victims on a weekend of shock defeats.

Yet it was hardly a pleasing outcome for Ferguson, who would have hoped for better once Nani levelled Zat Knight’s early effort but instead saw his team fall behind again thanks to Martin Petrov. As United have now conceded nine goals in five league games and trail leaders Chelsea by three points, it was not the best of weekends for them, nor an out of sorts Wayne Rooney, who was replaced by Federico Macheda half an hour from the end. Full Report

Bolton News – Wanderers had to settle for a point against Manchester United after twice throwing away the lead at the Reebok. Bolton were on course for only their second home win against their neighbours in 32 years when Martin Petrov put them in front for the second time on 67 minutes.

But sub Michael Owen grabbed a 74th minute equaliser when he headed home with his first touch after coming off the bench. Zat Knight handed Owen Coyle’s side a dream start when he flicked in Petrov’s corner after just six minutes, but United were level thanks to stunning effort from Nani on 23 minutes. Full Report