Win at home, draw away and you win the title. At least that was the magic formula in a previous life but that was in the days when a draw meant half rather than a third of a win. While 76 points may mean remaining in the Premiership chase it’s unlikely to be sufficient to take the trophy even though Manchester United managed to do it in 1996-97 with 75 and Arsenal took the title on goal difference with 76 in 1988-89. United retained it’s unbeaten record in their scoreless meeting with Sunderland for it’s fourth away draw of the season and while failing to get maximum points was disappointing, there were some real positives to come out of a tough encounter.

Coming on the back of a rare midweek Champions League victory in Spain against a lively Sunderland side which is proving to be a handful for anyone – as both Manchester City and Arsenal found out recently, this was more a case of a point won rather than two lost and may prove to be invaluable at the end of the season. After all, we are still in the first lap of a long marathon. A second successive clean sheet is also encouraging after conceding nine in their previous six matches and it’s no coincidence that Rio Ferdinand was back in the middle of the defence for both of them. Sir Alex Ferguson will now be praying that Ferdinand can finally stay clear of any further injuries. 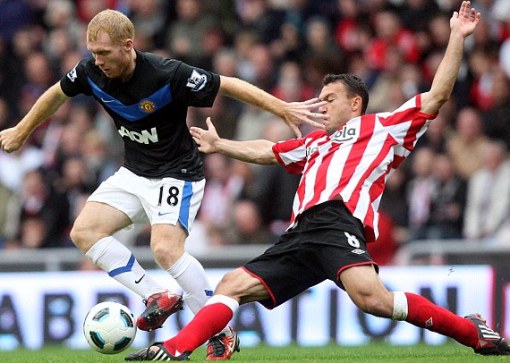 The Guardian – The kick-off was delayed by 20 minutes after a burst water pipe brought down the ceiling in the Manchester United dressing room. And the Commonwealth Games athletes think they have it bad. The roof only fell in on United once, however, despite Sunderland’s best efforts in a first half when they were on top. They will regard this as two points dropped and with it the chance to catch Chelsea at the top of the table, but after having the better of their last two games, against Liverpool and now United, Sunderland have reason to feel the same.

With Michael Owen and Federico Macheda surprise choices to lead the visiting attack United caused Sunderland few problems in the first period and better home finishing and a bit more luck could have seen them behind by the interval.Sunderland created by far the better first-half chances and should have taken the lead when Lee Cattermole’s excellent through ball put Steed Malbranque one on one with Edwin van der Sar only for the goalkeeper’s reactions to foil a less than decisive strike. Full Report

Manchester Evening News  – Edwin van der Sar was Manchester United’s saviour as Sunderland boss Steve Bruce came close to breaking his duck against Sir Alex Ferguson. The veteran Dutchman produced a fine 16th-minute save to deny Steed Malbranque and then saw compatriot Bolo Zenden hit a post eight minutes before the break as the home side enjoyed much the better of the first half.

Half-time substitute Dimitar Berbatov had a 48th-minute strike ruled out for offside and after Nani had forced a good stop from Simon Mignolet, fired inches wide 10 minutes from time as United improved after the restart, but the Black Cats were more than good value for their point in front of an appreciative crowd of 41,709. United’s preparations were rudely interrupted by the burst pipe which flooded their dressing room ahead of kick-off, and the hospitality got little better when the game eventually kicked off 20 minutes later. Full Report

Sunderland Echo – Sunderland failed to make the most of their superior chances as the visit of Manchester United ended in stalemate – the Black Cats’ fifth draw in their opening seven Barclays Premier League games. Kick-off was delayed by 20 minutes after a burst pipe sent water flooding into the visitors’ dressing room.

Whether or not the disruption affected United is debateable, but their keeper Ed van der Sar and the woodwork kept Sunderland at bay as the hosts dominated the first half at the Stadium of Light. The Dutchman pulled off a 16th-minute save to deny Steed Malbranque after Lee Cattermole had played his fellow midfielder in and Bolo Zenden saw a 37th-minute effort come back off the post. Full Report

Was the scoreless draw at Sunderland a good result for United?