The famous Manchester United FA Youth Cup winning side of 1992 will very likely be broken up soon with the imminent retirement of Gary Neville and Ryan Giggs. Nobody wishes it upon them obviously but time eventually catches up with everyone and the two veterans have managed to extend their careers far longer than anyone has a right to reasonably expect. Despite the many misconceptions, Paul Scholes and Phil Neville were not a part of this group and only made the team for the following season’s final.

Those were a special bunch of youth players who are still remembered with awe so many years later. Barely half of FA Youth Cup winning members have decent careers in professional football and even fewer stay in the top flight. The fact that no fewer than seven of that United side which defeated Crystal Palace went on to represent their various countries is incredible to say the least.

The seven were David Beckham, Nicky Butt, Neville and Giggs plus Robbie Savage, Keith Gillespie and the less well known Simon Davies who made a single appearance for Wales. Giggs was a substitute in that final having already broken into the United first team as was Gillespie who established himself in the Youth team during the following season. 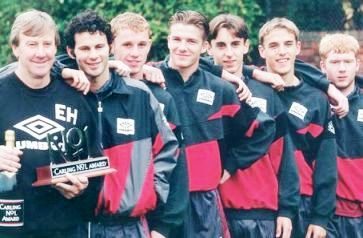 So what happened to the rest of those youngsters as their senior careers developed?

Chris Casper – was extemely well thought of and captained the England Youth side. He couldn’t break into the United first team and moved to Reading where aged just 24, a double leg fracture ended his career in 1999. He moved into coaching and became the League’s youngest manager with Bury. Since leaving Bury he returned to Old Trafford as a youth team coach.

Colin McKee – also found it difficult to get a break at Old Trafford and the Scottish forward made just one appearance- he joined Kilmarnock and played 78 times for Killie before playing for several lower division sides, though never for more than a handful of games. He quit the pro game in 2001.

George Switzer – never managed to make a first team start and his professional career never took off. For many years the defender played for local non league side Hyde United.

John O’Kane – had stints with Everton, Bolton and Blackpool plus loan spells at Burnley and Bradford City. By 2003 he had also moved into non league with Hyde.

Ben Thornley – was considered an excellent wide man but the competition from Giggs, Beckham, Andrei Kanchelskis and Lee Sharpe was intense. He was also very unlucky with fitness – one tackle in particular was the subject of legal action after the player suffered horrific injuries. By 1998 he had just 9 starts to his name for the club and so moved on to Huddersfield Town. His stay was a mixed one and then he drifted down the divisions. By 2004 he too was in non league.

Kevin Pilkington – has had a solid career between the sticks, over 300 games, mainly at Mansfield Town and Notts County. Last season he turned out in eight league matches for Luton Town in the Blue Square Premier.

Members of that side became known as Fergies Fledglings and provided the basis for the swag of honours which came into Old Trafford for nearly two decades – and have not yet stopped.

Can United ever produce a Youth Team of that quality again?