There was a report in a business journal a few years ago in which the writer gave an opinion that whenever News Corp boss Rupert Murdoch dies, the news may not be released for as long as possible for fear that the corporation’s share price will plummet. That story came to mind when it was revealed that Wayne Rooney made his U turn after he had a phone conversation with Joel Glazer rather than with the 82 year old patriarch Malcolm. Now nobody wants to wish the old boy any physical harm but you cannot help but start wondering if maybe, just maybe…

It was widely reported at the time that Malcolm suffered a stroke on April 16, 2006 causing impaired speech and loss of mobility in his right arm and leg. At the time, his son Joel said “My father’s spirits are high and doctors expect his condition to improve with rehabilitation” but after spending much of the intervening period in hospital, Glazer suffered a second stroke the following month. 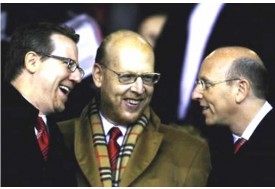 Stop and think of how long it’s been since anyone has seen or heard anything about him. No further statements have been made about his health since having those strokes raising the possibility that the man may either be lying in some hospital completely incapacitated – or worse.

Should there be anything in what is admittedly pure speculation, the business – including Manchester United, will be in the hands of his sons, primarily vice president Joel, the man from whom Rooney apparently got assurances about the clubs future this week.

Does it really matter in the end? Maybe not but if the business is, or will shortly be, inherited by five sons and their sister, there’s bound to be plenty of different, maybe conflicting opinions, as to what the future holds for Manchester United.

Does Malcolm Glazer still holds the reins in the Glazer family?