Here’s some free advice to younger Manchester United fans. The older you get, the sharper your memories become especially when it’s involved with football. The strange thing is that you tend to remember special names that may have been forgotten by most others. A perfect example is former Ireland international John Giles who after winning an FA Cup medal with United in 1963 went on to become a legend for both Ireland and Leeds United but it’s the six years spent at United that sticks in one’s memory.

Here’s some free advice to younger Manchester United fans. The older you get, the sharper your memories become especially when it’s involved with football. The strange thing is that you tend to remember special names that may have been forgotten by most others. A perfect example is former Ireland international John Giles who after winning an FA Cup medal with United in 1963 went on to become a legend for both Ireland and Leeds United but it’s the six years spent at United that sticks in one’s memory.

Giles was voted Ireland’s greatest player so when his new book ‘John Giles: A Football Man’ is released in November, it will make compulsive reading for this old fart – and I dare say, many of the same generation. His memories of joining United as a young kid makes for a highly interesting Sunday read – here’s an extract from the book published in Irelands Sunday Independent 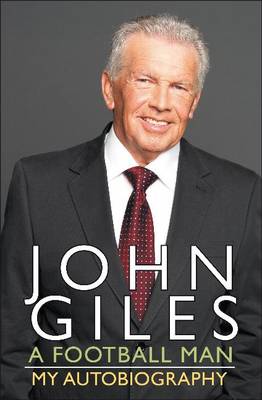 “I have something to tell you” my father said. We were in the pantry in 7A, a tiny room, and I had no idea what he was going to say. “Manchester United want you to go over . . .”

Until that moment, I wasn’t aware that United had any interest in me, of any kind, let alone that they might want me to go over. As I listened to him telling me that United — my team — wanted me to join them for two weeks in the summer, during their pre-season, I felt a burst of elation beyond anything I had ever felt in my life. In that moment, the dream stopped being just a beautiful thought in my head and in my heart. It was going to happen.

Billy Behan was United’s chief scout in Ireland and, apparently, he had been watching me for some time. My father and Billy went back many years, and my father knew that Billy was thinking of recommending me to United. The connection had been made. But he never let me know about it. He got that right too.

Billy Behan was a tall, easy-going man, who had played for United as a goalkeeper. Over the years, he had famously sent over players from Ireland such as Jackie Carey, Liam Whelan, Joe Carolan and, later on, Tony Dunne and Kevin Moran.

He had a kind of a sixth sense for identifying the players who would make it, a bit like the way that, say, Vincent O’Brien could look at a yearling and in his mind’s eye, see a Derby winner. At United, they valued their Irish links, not least because of the calibre of player that Billy Behan had found for them. Matt Busby and the assistant manager Jimmy Murphy would come over to Dublin to meet him, and he would be in regular communication with the chief scout Joe Armstrong.

Billy would be moseying around the junior football matches of Dublin, either standing on the sidelines or refereeing, a football man to the core. And he was not just a talent-spotter, he was an amiable man who was good at fostering relationships with a young player’s family — he was a non-drinker, which perhaps also helped to steady the nerves of worried parents. But even Billy, with all his powers, couldn’t quite convince my mother that it would all turn out fine.

As I prepared to leave for Manchester, she was fretting so much, she took the extreme precaution of sticking a safety pin through a pound note — which was a lot of money at the time, certainly in Ormond Square — and fastening it to the lining of my jacket, to be used in an emergency. She blamed Billy Behan for disturbing the peace at 7A.

Yet, especially by today’s standards, her concerns were probably justifiable. After all, I was not flying to Manchester on a first-class ticket with Aer Lingus, accompanied by my parents and my agent, and perhaps even my media advisor, as the promising fourteen-year-old footballer of today might.

It was 1955, and I went over on the boat, on my own. I arrived in Liverpool early in the morning, and then I got the train from Liverpool to Manchester, on my own. Joe Armstrong was waiting for me at Manchester Central station. So amid all the excitement, I had worries too, about getting lost, or getting on the wrong train in Liverpool, or otherwise seeing my dream getting away from me through some mad misfortune.

My mother couldn’t bring herself to see me off at the North Wall. She would probably get too emotional, thinking that this might be our last goodbye. It was my father who took me down to the boat for the night crossing. If he was worried in any way, he didn’t let it show. He knew I’d get there.

On the train from Lime Street to Manchester I saw Old Trafford for the first time. It looked much bigger than I had ever imagined it, like some gigantic beast perched over the city. It was a sight that I found both awe-inspiring and thrilling. I didn’t know what Joe Armstrong looked like, and he didn’t know what I looked like, but he spotted me easily enough, his eyes well trained after many years of watching young footballers getting off the train and arriving in wonderland.

I stayed with Joe at his home in Stockport over the weekend, before settling into the digs on Monday. But first we got the bus to the ground. Nearly everyone at United got the bus in those days, when the maximum wage was £20 a week and £18 a week during the close season. Even Duncan Edwards got the bus.

As we got near the ground, I saw Duncan Edwards for the first time. He was sitting on top of a post box on the Stretford Road, eating an apple while he waited for the bus. He was already famous, a full England international at eighteen, and widely regarded as the greatest young player anyone had seen for a long time. And since he was basically still a big kid, his potential was frightening. Joe introduced me to him. “John, this is Duncan Edwards,” he said. Duncan Edwards, sitting there on top of the post box, acknowledged me, and then went on eating his apple.

I reported to Fallowfield on Monday morning. In his fatherly way, Joe Armstrong had treated me as if I was a member of his own family, helping me greatly to adjust to my new world. In those days, everyone at the club trained together in pre-season, which meant that I was training alongside Duncan Edwards, David Pegg, Tommy Taylor, Liam Whelan and the rest of the Busby Babes. I was the youngest player out there. I was in heaven.

It was the last year they used Fallowfield for pre-season training, and it was a beautiful place, in an area better known for the cycling track next door. There were two football pitches which were also used for cricket and we changed in the cricket pavilion rather than a football dressing room.

Everywhere I looked, I saw these great players doing their stuff, getting ready for the new season. I saw Jimmy Murphy giving the instructions and I met Matt Busby for the first time. The impression I formed of him after that brief meeting was that he was a very pleasant, modest, charming man. I would eventually learn that my first impression was just about right.

It was the club’s aim under Busby and Murphy to go out and find the best schoolboy international players in England, Ireland, Scotland and Wales, an enlightened policy which was already paying off — this team would win the league in the coming season of 1955-’56 and it was a privilege to be so close to them as they were making the breakthrough.

They were very kind to me for the few weeks I was there, especially the Irish lads such as Tommy Hamilton. I can’t speak highly enough of Tommy’s generosity and his patience. And though I was probably a total nuisance in the circumstances, I was given a great welcome by the late Jackie Scott, and by Liam Whelan, a Cabra kid who had established himself at inside-right in the first team the previous season.

Liam was known in England as Billy, the way that Jackie Carey became Johnny in England. Farther up the line, my own name would change to Johnny too, whether I liked it or not, but I was still John at Fallowfield in 1955. My own family and everyone I had ever known back home had always called me John and, later on, if someone called me Johnny, my mother would shake her head and say, “Ah, he doesn’t know you.” Likewise, Billy Whelan was always Liam to me, a big brother.

Freddie Goodwin, the centre-half who I would later play with at Leeds United, was also very friendly. He also had the distinction of being one of the two United players at the time who owned a car, the other was the team captain Roger Byrne, who also played for England. They were not big cars, they might even have been second-hand cars. It was not uncommon at the time for footballers to play county cricket during the close season and Freddie, who played for Lancashire, was one of these dual stars. Presumably, the extra money he made from the cricket enabled him to splash out on the motor.

I remember watching the first and second teams playing each other, and it was a measure of the talent at the club that Bobby Charlton, then seventeen, couldn’t get a starting place in the reserves. But I saw him coming on as a sub in practice matches a few times, and I thought he was special. I now believe that Bobby is the greatest player I ever played with or against, but with the Busby Babes in training that summer, he was just a substitute. In fact, he was a sub for the substitutes.

I knew him mainly as my bowling buddy. After staying with Joe Armstrong and his family over the weekend, I had moved into digs for the fortnight. And as there wasn’t much to do there, I would go to a park nearby, where they played crown green bowls. I developed a liking for the game.

Bobby Charlton didn’t have much to do in his digs either, so he would also find his way to the park, where we would play bowls together. I’ve always liked Bobby as a person and revered him as a player. He could be a bit quirky, but a really decent human being. A decent bowler too.

Written by Frank Scicluna
Ferguson's Old Trafford empire is as solid as ever
Nani played the whistle, Gomes did not, United 2-0