The rich history of Manchester United is full of red letter days. Think February 6 for obvious, tragic reasons, May 26 for possibly its greatest ever day when United completed what was thought to be an unachievable treble and 6 November when Sir Alex Ferguson was appointed manager at Old Trafford.

Another which is arguably the most significant of all is 27 October when a young Matt Busby took charge of his first ever match at United in 1945. Who could have predicted then that Busby would go on to remain in the job for a quarter of a century? The club official website manutd.com ran a feature last week on that 65 year anniversary which Truly Reds believes should be reproduced in tribute to a great man who became known as the Father of Manchester United.

“The arrival of one of English football’s greatest ever managers was heralded by a home fixture in Football War League (North) against Bolton Wanderers – however, with Old Trafford rendered unusable by German bombs, the game was played at Maine Road. The Reds won 2-1 with goals from Johnny Carey and Harry Worrall. 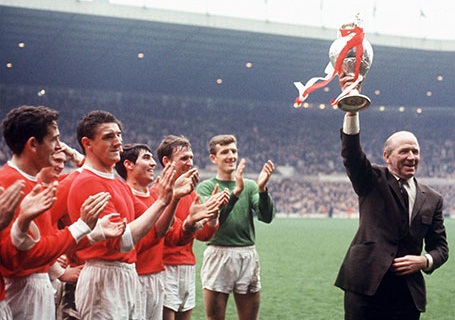 A former Manchester City and Liverpool player, Busby had in fact accepted the position of United manager on 19 February 1945, but he had to wait until October to join the club full time following his demobilisation from the army. Together with his loyal assistant manager Jimmy Murphy, Busby created a team good enough to win the FA Cup in 1948 and to challenge for the League Championship. After finishing runners up four times, Busby’s men won the title in 1952.

Far from being blinded by their success, Busby and Murphy had the foresight to plan ahead and prepare for the day when their first great team would need replacing. The club’s scouting system was expanded and reorganised, soon yielding a young team that won the title again in 1956 and 1957 and reached the FA Cup final in 1957. This young team was christened the ‘Busby Babes.’ Busby trailblazed the way for English clubs by entering the European Cup in 1956/57 – initially against the wishes of the Football League. United reached the semi finals, losing to eventual winners Real Madrid. 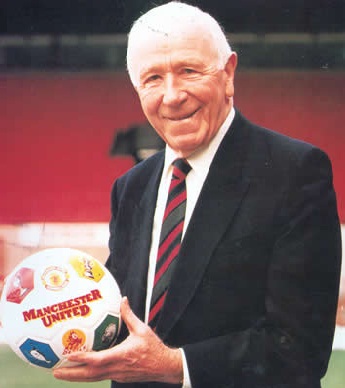 The following season, 1957/58, bristled with promise and United were still challenging in all three competitions by February when disaster struck. On 6 February 1958, the aeroplane bringing the team home from a European Cup match against Red Star Belgrade crashed after refuelling in Munich. Twenty three people were killed, including eight of Busby’s players and three club officials.

Busby almost lost his life as well – he was twice given the last rites while lying gravely ill in a German hospital. Fortunately he survived and returned to Manchester 71 days after the crash. Taking up the managerial reigns again in August 1958, Busby began to rebuild United, bringing in some big money purchases to add to his homegrown talent. The new group of players reached the FA Cup final in 1963 and beat Leicester City 3-1 to claim the club’s first trophy after Munich.

League titles followed in 1965 and 1967, giving Busby the chance to conquer Europe in the following seasons. In 1965/66 United reached the semi finals just as they had done in 1956/57 and 1957/58. But in 1967/68 they went further, to the final at Wembley where they faced Portuguese side Benfica. On another night of great emotion, United triumphed 4-1 after extra-time to win the European Cup. It was a fitting tribute to the players and staff killed and injured 10 years before and was Busby’s crowning achievement as United manager.

Busby retired at the end of the following season but stayed on as general manager while Wilf McGuinness became the man in charge of the team on a day to day basis. The new arrangement lasted little more than a year – on 28 December 1970, Busby was invited by the Directors to return to his old job and replace McGuinness until the end of the season.

A respected figure throughout his career, Busby was awarded the CBE in 1958. Ten years later he was knighted following United’s European Cup triumph. In 1993, Warwick Road North, the road which runs past Old Trafford, was renamed Sir Matt Busby Way in honour of the man described as ‘Mr Manchester United’.

When after a short illness, Sir Matt died on 20 January 1994, thousands of people lined the streets of Manchester and similar numbers of shirts, wreaths, pictures and scarves were laid in tribute at Old Trafford. A bronze statue of Sir Matt was unveiled at the stadium on 27 April 1996 as a permanent memorial to the man who epitomised the club. Five years after Busby’s death, United won the European Cup for the first time since 1968. Poignantly, the date of that triumph for Sir Alex Ferguson’s side, 26 May 1999, would have been Matt’s 90th birthday.”

To have one of the worlds major clubs managed by just one man for a quarter of a century is virtually unheard of, to have just two for 50 out of the last 65 years is approaching the realm of fantasy but it may well be the reason for Manchester United becoming one of the world football giants.

Which one of  the two do you regard as the greatest manager?