Empty seats getting the silent treatment

A friend of mine, who’s a massive City fan (seem like conflicting statements, don’t they?) told me an interesting story last night. He has a client at work who is a football neutral, but who has a son who has very much been bitten by the football bug. 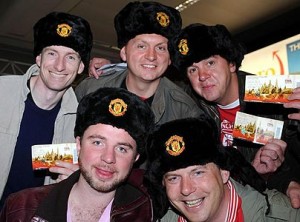 A friend of mine, who’s a massive City fan (seem like conflicting statements, don’t they?) told me an interesting story last night. He has a client at work who is a football neutral, but who has a son who has very much been bitten by the football bug.

Living in Manchester, the choice for the lad is logically United or City. So what factors would you say would affect the boy’s allegiance? The history and past success of the team in question? Future potential? Contemporary favourite players? Who his mates support? No, what has swayed the boy heart towards Man City is ticket prices!

For any Manchester United fan who was at the Wolves game on Tuesday, hearing that the attendance was approximately 46,000 was borderline embarrassing. Having checked the numbers, City actually had more fans in their home game to Liverpool in the league. Granted, that was a big league game, but City having more fans at a match than United? Unheard of in recent times. Okay, a positive to take from it is that it shows that the anti-Glazer movement is progressing (as heard by the “Love United, Hate Glazer” chants that followed the attendance announcement), but you have to worry about the future of the club with attendances like that.

Because my City mate also expressed amazement and bemusement at the Wolves attendance, proclaiming it to be a turning point in the history and fortunes of Manchester United and a shift in the balance of footballing power in Manchester. I’m inclined to agree. Because Man City, the “biggest” team in Manchester, have been very clever and sneaky in recent years. Taking advantage of their financial backing, they offer season tickets to children for as little as £200-£300, and individual tickets for certain matches for as little as £10. United, so I have heard, refused to make any such concessions for the Wolves game on Tuesday. A child sat in Old Trafford on Tuesday will have paid full whack (well, their parents will have done).

Airlines are known to often adopt the City approach. If you have a 250 capacity plane about to fly off to Spain, and only 240 tickets have been sold, you might as well sell off the last 10 for close to nothing. Either you get some money or you get none, it’s a no-brainer. Not for United it seems, who are determined to squeeze out every penny they can and take advantage of a football fans loyalty, and with £80m in interest payments to adhere to each year, I guess they have to. They even state as an objective of the company on the year end accounts to treat fans as customers, and boy are they.

As an economics graduate and accountant in training I can understand the Glazer’s policy in way, because for years United tickets were undervalued. £20 to see one of the biggest teams in the world? That certainly isn’t a revenue maximising pricing strategy. But not budging on your position, despite there being 30,000 empty seats? As my flatmate pointed out, that’s just plain arrogance.

But the more important issue to note with regards to this situation is the fact that football clubs aren’t like airlines. You don’t swear allegiance and loyalty to BA or Ryanair. But football clubs? They’re for life. Because of the fact that they cut prices for games that aren’t going to sell out, City are attracting thousands of potential future season ticket holders, United’s potential future season ticket holders.

Because I’m sure there are thousands of kids out there in this country, dressed in their Man United kits and carrying around their United annuals, who have probably never been to a United match. It’s not that because they’re fickle, or lazy, or “plastic”, it’s because their parents can’t afford the tickets. I pay £700 for my season ticket and roughly £35 for each home cup game. I’d be happy to pay £800 and £40 respectively, probably even more, in order to subsidize tickets for the less well off, because unfettered globalisation and capitalism, of which football is becoming more involved in and associated with, has a tendency to leave the poor behind.

The Glazer’s, and owners of football clubs all around the country, need to do more to realise that football clubs are more than ordinary businesses. Yes, the owners and the clubs have every right to maximise their revenues and profits, and in some cases it’s in the fans interests, because your team aren’t going to buy the best players in the world if the fans are only paying a fiver a ticket. But football clubs have a responsibility to the community, and whilst I have nothing against and will not deny the right of the so-called “day trippers” to go to games, they need to realise how lucky they really are. For some of the less fortunate out there, football is a way of life, and they’re increasingly being denied that right because of the circumstances and environment they were born into. A child can’t choose whether they’re born into a rich family, but they should be able to choose which football team they want to support!