As every good striker knows, when a chance comes, it has to be taken. There is no guarantee that another will arrive. It is the philosophy by which Dwight Eversley Yorke has lived his 39 years, more than half of them lighting up English football with that smile. “I’m a one-opportunity kind of guy,” is how he puts it. “I did it in football and in my life. I have one opportunity and I either do it or not and then I walk away. I firmly believe in that.” 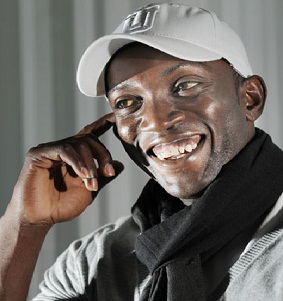 Mostly, the belief has served him well, sometimes less so. There was, after all, only one chance when Aston Villa summoned a young Yorke, the eighth of nine children in a small Tobagan village, for a trial in what he found to be the bitterly cold Midlands (it was September).

Only one opportunity nine years later, even though Manchester United were offering far less money for his signature than the supposedly parsimonious Villa chairman Doug Ellis would pay to keep him; only one chance, when Katie Price, aka Jordan, walked towards him one fateful evening in a Soho club, her most famous assets barely concealed in a tiny dress.

He could not resist that one, or the opportunity to join in Trinidad & Tobago’s wild celebrations at reaching the World Cup finals, despite knowing that Sir Alex Ferguson wanted him back promptly for training. And so on down the slope that most footballers must eventually negotiate.

One opportunity that he would have loved, to return to Villa, was taken away when the club signed Peter Crouch instead. Another did arise, and proved the wrong one to grasp as he fell out with Graeme Souness at Blackburn. Sign for Martin O’Neill at Celtic on transfer deadline day or race back to the Midlands after the phone call came from Steve Bruce at Birmingham City? Head for the other side of the world and Sydney’s sunshine when having a bad time personally and professionally? Then give all that up at the behest of Sunderland’s new manager, his old captain Roy Keane?

Summing up, now that it is all over, in reflective mood at the Trinidad & Tobago stand of the World Travel Market in London, he insists: “I’ve been very lucky and blessed. Hand on heart, I made mistakes. I was a very easy-going free spirit, a very laid-back West Indian type of bloke. If I could turn the clock back, I could have done things better but who wouldn’t? My advice is to enjoy the moment because it doesn’t last, it goes away from you so quickly. I realise that now, being out of the game, but I’m happy and I have no regrets. If you ask me if I’d do the same thing again I probably would because truly I was happy and that’s why my football was what it was. I’ve tried to change, two or three months sitting at home, and to be honest it’s not me.”

When he adds “I’m an outgoing person”, there is no pun intended. But boy, did he like to go out. Which is why Ferguson greets him these days with “Here he is, the boy who’s given me all this grey hair!” A grin as wide as Yorke’s own is inclined to follow and the affection is mutual. “That’s what he says every time he sees me. I had a fantastic four years at the club. Don’t forget, I’m a little island boy who’s come from the Caribbean not knowing football at all. If somebody said I was going to be playing for the greatest club in the world, in a Treble-winning year, knowing what I’d achieve in that time, I’d say ‘you’re fibbing me’. Great ride, great players, great manager, great experience.”

In nine years at Villa, although it was “a phenomenal experience”, he won only one League Cup. In less than half the time at United, increasing his goal ratio to one every two and a half games despite some fierce competition, he landed a hat-trick of Premier League titles and, of course, the Treble of 1999. Then, with two sharp words from Ferguson ringing in his ear – “you’re failing” – it was all over. “For the four years at Man United hopefully I contributed to the football, and that’s it. My time was up and I couldn’t do anything about that.”

He did not enjoy Blackburn and Souness (who threatened to break his leg in a training game) or Birmingham, with a more sympathetic Bruce, largely because his so-called private life was unravelling and being played out in the nation’s newspapers and celebrity magazines. Jordan became pregnant at a time their relationship was deteriorating; their son Harvey was born blind and the difficulties in visiting him at her home in Brighton while playing for Blackburn Rovers or Birmingham City led to even greater tension. At one point he even talked to a golf professional about taking up the sport full-time.

“I really fell out of love with football at that time. My sister died unexpectedly, there was Harvey with his dis-ability and suddenly you realise there’s more to life. With my problems with Jordan in the meantime, it was really a difficult time for me. I felt I needed to get out, have a break. And the Lord answered my prayers, Sydney was very attractive.”

So much so that a phone call in the summer of 2006 after he had led Trinidad & Tobago at the World Cup (losing only in the last few minutes to England) required a great deal of thought: “Sunderland were in the Championship, Roy Keane had taken over the job and I had a real surprise when this voice came on the phone asking me to come back to the UK to help him. It was flattering, a great honour to know that I was the first player he’d called when he took over the job. I thought it was a challenge, even though I had a fantastic life in Australia. I was having the best time ever and I’d found love again with football. It was a truly fantastic time.”

Sydney Harbour or Sunderland? Football won and “three great years” followed. He officially retired at the end of the season before last and now keeps busy working in the media from his Manchester base; representing Trinidad & Tobago; inching the golf handicap further towards scratch; and backing Australia’s 2022 World Cup bid. A clash with England’s has thankfully been avoided and he would love to see Old Trafford, Villa Park and other venues here staging games in 2018. “I don’t see any reason why England shouldn’t get it. It’s well overdue, the foundations are all there. It has to happen.” Will he tell all that to his friend Jack Warner, the influential Trinidadian Fifa executive member whose house he once shared for six months? “He knows, he knows.”

Even though Yorke enjoys life outside football more than many former players, he has taken his coaching badges up to Level B, and has by no means discounted returning to the game. Much as he enjoyed Sunderland, his management style, he confirms, would not be based on Keane’s.

“The one thing when you become a manager is you’ve got to be able to deal with your players. Individuals are different. Roy had been fortunate enough to play for Manchester United, at the very best of the best for 14 years. So he doesn’t see outside that. I’m not saying he has to go around putting his arm round players every two minutes but he has to learn that individuals do need that from time to time.

“That for me was the disappointing thing with Roy. I was there as a senior player and I’d tell him he could do things slightly different. As a manager you’ve got to make tough calls but I was trying to help him and say ‘you need to deal with this situation a little bit better’. My experience of being in the game for 23 years as a pro is that you’ve got to be able to deal with people. I don’t think Roy is a people person.”

The Level B qualification entitles him to coach at Championship level, “but I’m not going to do three more years to get qualifications and no one gives you an opportunity”. Opportunity, opportunity. Will it knock one more time? It would be fun.

1971 Dwight Yorke is born in Canaan on the Caribbean island of Tobago, one of nine children.

1989 Joins Aston Villa under the management of Graham Taylor.

2000 First of three successive League titles; meets Jordan in a night club after a game at Charlton.

2002 Son Harvey is born; Yorke is sold to Blackburn after scoring 64 goals in 151 games for United.

2004 Joins Birmingham after falling out with Graeme Souness.

2005 After only 16 appearances, he moves to Sydney FC and wins the inaugural A-League Grand Final.

2006 Captains Trinidad & Tobago in their first World Cup, in Germany; returns to England with Sunderland.

2007 Son Orlando is born to his partner Naomi.

2009 Released by Sunderland and retires from football.

Did Yorke harm his career by enjoying life to the full?