A good week has just got better for Manchester United young Italian striker Federico Macheda after netting twice in an Under 21 friendly 2-1 defeat of Turkey on Wednesday. Kiko had sparked that late fight back by United at Villa Park on the weekend and believes that there are more from where those goals came from pledging to follow his brace with a hat trick – then slammed former Italy Under-21 Coach Pierluigi Casiraghi. “I can give more” he told the Gazzetta dello Sport “If I scored two this time, then for the next game I will get three.”

Macheda was the star of the show on Coach Ciro Ferrara’s debut, but the United striker had been repeatedly benched by the previous boss. “Casiraghi never had any faith in me. I have never felt the way I do today. I like Ferrara though, as he is relaxed and really talks to you. He put his faith in me and I repaid him.” 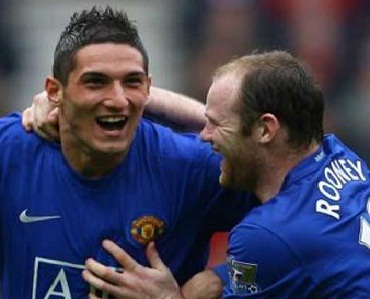 The confidence will now be sky high for the Italian saying “I’ll return to Manchester and Sir Alex Ferguson feeling happy and I think he will be too.” Macheda also hailed teammate Marco D’Alessandro, who provided the assist for his second goal.

“We’ve been friends since we were 10 years old. He is too kind in his compliments and deserves much of the credit for the second goal. Ferrara said that if he was in defence for Turkey, I wouldn’t have scored!

Kiko gave the Azzurrini the lead just four minutes before half time after a nice one-two with Fabbrini. Things got even better in the second half despite Ferrara making wholesale changes at the interval. Macheda doubled the Under-21s’ advantage after 56 minutes. He did very well to beat the offside trap, then went around the Turkey keeper.

One of the Azzurri’s most prolific marksmen in his days was Christian Vieri and there seems to be an unmistakable similarity between the two, with Kiko possibly having a slightly better technique. Macheda will now be hoping that a great week will have a perfect finish by Ferguson giving him some game time against Wigan on Saturday – and who knows?

Should Machedo be used against Wigan on the weekend?