It happened all of 25 years ago but it has now been revealed that Sir Alex Ferguson was decked in a sensational dressing room bust up by one of his own players. The then Aberdeen boss hit the ground ‘like a ton of bricks’ after being smacked in the face by angry striker Frank McDougall. Fergie is famous for his ‘hairdryer’ treatment who once cut David Beckham’s eyebrow with a flying boot but he more than got a taste of his own medicine after going face to face with the fired up McDougall.

The story is revealed in ‘McDou-GOAL! The Frank McDougall Story’, the player’s new autobiography which was featured by The Sun. 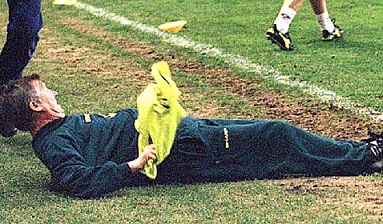 McDougall recalls “Within seconds, Fergie was right in my face.It wasn’t possible to get any closer. I was for it. I had a lot of respect for Fergie but I had learned a long time ago that in a situation like this, you lash out first and ask questions later. Only problem was, I wasn’t on the mean streets of Glasgow where I came from. I was at my ‘work’ and it was the boss in my face. But he had completely lost the plot and I wasn’t for waiting to see what he was about to do.”

Fergie was raging that McDougall had declared himself fit to play in a 1985 Scottish Cup tie while still carrying an injury. It caused him to be substituted after only a few minutes. The following day the team were called in for training and Ferguson let rip –   only to finish second best.

“I lashed out. It was far from a bout winning punch, more a ‘half-dig’. I caught him on the side of the face and he went down like a ton of bricks. Of all the stupid things I had done in my life, putting Fergie on his arse had just stormed straight into the charts at No 1. I gazed at my hand and then down at my boss. It was as though he’d fallen to the floor in slow motion. But he bounced straight back up as though on a trampoline and began screaming at the top of his voice.

He was looking at one of our coaches Teddy Scott but shouting at me. ‘F*** off McDougall, get to f*** back to Glasgow‘. Then he told Teddy ‘Get him out of here, he’s f*****g finished’. I felt sick to the pit of my stomach. Beads of perspiration dripped from my brow and I was 100 per cent sure that I’d blown it.”

Scott then acted as peacemaker and, after McDougall apologised to Ferguson he was back in the team. Fergie even pays tribute to him in the book. McDougall hit 104 goals in just 207 games for Clydebank, St Mirren and Aberdeen but had to quit in 1987 aged 29 because of a back problem.

Can anyone deck Ferguson today and get away with it?