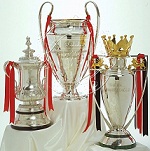 With Manchester United drawn to meet Liverpool in the FA Cup third round, memories were soon rekindled of the 1999 fourth round clash on the road to the Treble in 1999. Sir Alex Ferguson later reflected that defeating Liverpool was the pivotal point which set up that unforgettable season. Liverpool had taken an early lead through Michael Owen leaving United to hit the woodwork twice and dominating most of the second half without being able to find a reply. Home fans were all but ready to accept an inevitable end to a treble dream before United finally found a way to snatch victory from the jaws of defeat.

A late David Beckham free kick was met with an Andy Cole cushioned header which gifted Dwight Yorke a close range equaliser on 88 minutes. The relief around Old Trafford was nothing compared to the ecstatic celebrations which followed seconds later. Deep into stoppage time Ole Gunnar Solskjaer received the ball, wrong footed the Liverpool defence and struck a winner at the death amongst riotous euphoria. The dream of the treble remained alive – and the rest is history. 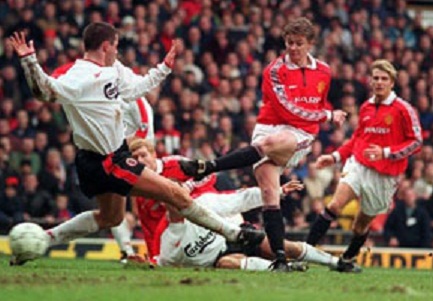 On a weekend when United find themselves at the top of the Premier League, comfortably through to the knock out stages of the Champions League and facing a home tie against Liverpool in the FA Cup once again, this self confessed optimist cannot help but wonder if an improbable dream could again be in the making. Just like 1999 proved, dreams CAN sometimes come true.

Here’s a chance to remember that 1999 Liverpool FA Cup defeat on the way to a historic Manchester United season. Just hit the pic to relive those memories.

Will an English club ever do the treble again?