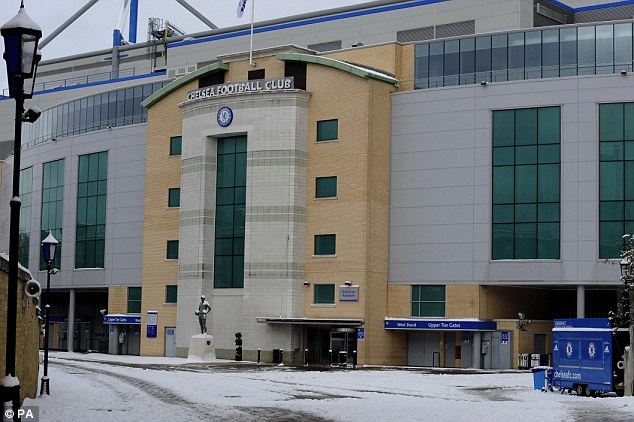 Today game between Manchester United and Chelsea called off after the Stamford Bridge was hit by heavy snow this weekend. But we had this quick chat with one of the promising Chelsea fans site, Blue Champions :

TR: How did you find Chelsea performance so far?

Blue Champions: Chelsea have been blowing hot and cold this season. The way Chelsea started this season, experts were saying that Chelsea were running away with the league. After a string of bad results, here we are hovering in the top four. Remember, Chelsea’s are having their worst run of form in the last decade and they are only a win away from cutting the gap to just three points and we have more than half of the season to go. In short, I’m disappointed that we didn’t capitalise on our massive lead and top form but despite the string of bad results, we’re still there. A win against Man Utd and Arsenal this month would turn the tables.

TR: Are you happy with Ancelotti’s progress with the club this season and are the fans missing Mourinho?!

Blue Champions: I think the fans are overall happy with Ancelotti. He made us champions again. He has changed Chelsea’s profile. He’s given a new identity for Chelsea with the new playing style. I think he has got the support of the fans despite the recent drop in form. I don’t think the fans are missing Mourinho. We still respect Mourinho as he will always be a Chelsea legend. Many of us still admire him and continue to support him wherever he goes. From a Chelsea point of view, I think we’ve moved on.

TR: What is your favourite game your club have played against United?

Blue Champions: Pretty obvious choice. The 3-0 win at Stamford Bridge in the 05-06 season. This was the result that made us back-to-back champions. This was the match when Jose Mourinho shook hands with Sir Alex minutes before the end, so he can proceed to celebrate with his players. The best Chelsea vs Man Utd match.

TR: Ahead of the game, how can Chelsea, last season champions, stop United and cost us our first league defeat?

Blue Champions: Chelsea need to play with confidence. We have Frank Lampard back in the starting eleven. We’ve got Terry and Drogba too. We should play Lampard, Essien and Mikel in midfield. Ramires should be in the bench. Even then, Josh should get the nod ahead of Ramires. Chelsea should play 4-3-3. Malouda should play only in the wing and not wasted in left midfield. We must hassle Man Utd’s midfield and close them down as soon as they have the ball. Of late, we have been allowing the opposition to have the ball and dictate play. Our midfield should put in an extra shift to control the match Chelsea style. We have all the players to inflict Man Utd their first defeat of the season. All that’s been missing until the Spurs match was the confidence to play the style of football that was so successful for us in the early part of the season. In the last weekend, we saw that Chelsea have got their confidence back. If that continues, Chelsea can beat Man Utd at Stamford Bridge. It’s not an unusual result at the Bridge, is it?

TR: This leads to another question, what will make United win at Stamford Bridge for the first time since 2002?

Blue Champions: Man Utd have always treated Chelsea with respect, probably with too much respect. I’ve seen Man Utd playing a bit too conservatively against Chelsea – playing with one-striker, defending not so high on the pitch, going for experience rather than form with player selection etc. Man Utd should play the really quick players as they’re the ones who can inflict maximum damage for Chelsea’s defence. Don’t play Gary Neville. Don’t play 4-5-1. Play two strikers. Bring on Chicharito later on. Attack Ramires. Play more in the air. Attack relentlessly. If Man Utd pick the right team, play an attacking formation and play with pace and force, they could beat Chelsea.

TR: What is your chance to win the league if you lose on Sunday?

Blue Champions: Ancelotti has partially answered this. Teams have lost bigger leads with fewer matches to go. It could definitely puts Man Utd in the driver’s seat but any team can have a bad run of form. Add the results of champions league into the mix, we hardly know what’s going to happen. If it gets to a nine-point gap, it’s unfortunate for Chelsea that it’s certainly not in their control and they should hope that Man Utd have a bad series of results. You never know, Man Utd’s February could be worse than Chelsea’s Novemeber.

TR: If you could have any three players from United’s current squad playing for you, who would they be?

Blue Champions: Rooney, Javier Hernandez and Nani – in that order. Rooney would perfectly fit into the Chelsea way of playing and can be of great value. Chicharito is a brilliant finisher who could be a red hot player in a few seasons. He could be a great super sub for Anelka. We’re a bit light on the right wing and the right side midfield. Someone like Nani would just be perfect. It’s no surprise that I want no midfielders, defenders or goalkeepers from Man Utd – I think Chelsea trumps in those areas.

TR: In the late 90s, Mark Hughes moved from United to Chelsea, last season United fans had no problem to see Tevez playing with Chelsea instead of Liverpool or Man City and during Wayne Rooney saga when he wanted to leave
to win trophies , United fans believed Chelsea not Man City is the proper club for Wayne to win something. How do you see the relationship between United and Chelsea fans?

Blue Champions: Let’s get this out of the way – most of the Chelsea fans hate Man Utd. In fact, it’s the Man Utd’s domination of the league, how rich and powerful they are in English football, the hypocrisy of the Man Utd administration, management and support that make the Chelsea fans detest Man Utd. Despite all this, I’m sure there’s a respect towards Man Utd for being a great club that is and their very successful teams with winning spirit.

TR: Finally, who would you like to see in UEFA Champions League final?!

Blue Champions: Chelsea vs Barcelona. In 08-09, Chelsea were robbed at the Stamford Bridge. There was something terribly wrong with the way Barcelona were rigged to progress to the finals ahead of Cheslea that night. The Chelsea fans just can’t get over what happened that night. We need another chance, a fair level playing field, preferably the champions league final, where we can knock the darlings of UEFA out of sight and win our first champions league trophy.

Anyway, I just learnt that Chelsea vs Man Utd has been postponed due to the weather. The new date is not announced yet. Whenever we play, may the best team win. Good luck!