Envious Manchester United fans have often stated in their ‘wink, wink, nudge, nudge, I know something you don’t’ manner that Sir Alex Ferguson has a group of agents in charge of rival clubs to help him win Premiership titles. They allegedly include Sam Allardyce, Alex McLeish, Steve Bruce, Mark Hughes and goodness knows who else they may imagine in their tiny, little minds. Well here’s another one to add to that list, Sir Alex has planted Manchester City assistant Brian Kidd at Eastlands because his former right hand man has hoisted the white flag by insisting that “The title is Manchester United’s to chuck away”. That’s it then, Citeh are no longer title challengers this season because Kidd has surrendered his club’s chances.

So who remains to challenge United? Champions Chelsea are on the skids, Arsenal has lost five of the last nine points they played for, Tottenham have never been a real threat, Liverpool are closer to the bottom of the table than they are to the top and City’s assistant manager has publicly given up their chances! 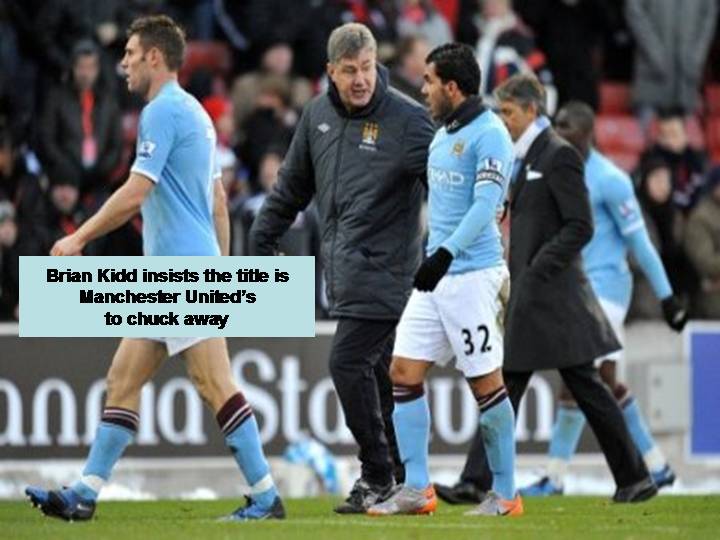 If these childish morons are to be believed, Ferguson has all the match officials in his pocket, dictates how much ‘Fergie time’ is added at the end of matches and has agents ‘planted’ at rival clubs! Why not simply present him and Manchester United with the Premiership trophy on New Year’s eve and declare the season’s remaining fixtures to be a useless exercise?

Is Kidd correct in saying that “The title is Manchester United’s to chuck away”?