There’s an old saying in professional sport that sometimes ‘you have to win ugly’ and it could barely have been uglier than this as Manchester United grabbed their second away win of the season at West Brom. England skipper Rio Ferdinand admitted as much when he told Sky Sports “You’ve got to win games. I don’t care how we win, the three points is all that counts. You’ve got to dig deep in these games and these are the type of games you can make up a lot of ground in the league” Ferdinand added “Credit to West Brom, they played some good football. They are not scared to pass the ball around.”

United manager Sir Alex Ferguson also thought that his side had struggled “It was a really tough game on a greasy pitch” he said “it’s a massive result for us today. Over the years we’ve had to battle out games and we have had to do that today. In the second half we started to play a bit better. We had to make changes with one or two injuries.” 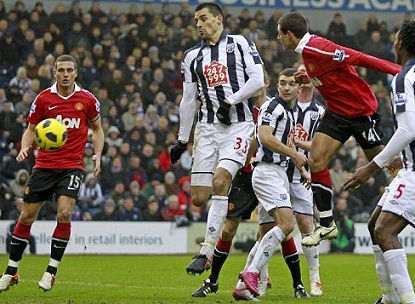 ESPN Soccernet – Javier Hernandez once again became Manchester United’s head-boy to seal a controversial victory over West Brom. The little Mexican’s eighth goal of the season, 15 minutes from time, sealed a second Premier League away win and kept United top of the table. Yet it barely told the story of a controversial match, the majority of which the hosts will forever be convinced United should have played with 10 men.

In addition, Wayne Rooney ended his nine-month wait for a goal in open play, James Morrison levelled with a brilliant volley and Peter Odemwingie missed a second-half penalty after Gary Neville had inexplicably escaped conceding one before the break. That United ended the game with Rooney limping badly only added to the drama. Full Report

Express and Star – James Morrison’s thunderbolt had on 14 minutes had drawn the Baggies level, after United went ahead on 14 minutes through Wayne Rooney’s first goal in open play since last March. The Baggies bossed much of the game from then on and were denied what looked a blatant penalty before half-time, when Gary Neville appeared to tug down Graham Dorrans.

They were given a spot-kick after the break for Rio Ferdinand’s trip on Jerome Thomas, but leading scorer Odemwingie missed the target from 12 yards. Hernandez then rubbed salt into the Baggies’ wounds by heading home from Rooney’s corner with 14 minutes remaining. And Albion’s misfortune was compounded as Steven Reid and Pablo Ibanez both limped off to exacerbate boss Roberto Di Matteo’s defensive shortage. Full Report

Manchester Evening News – Mexican star Javier Hernandez came off the bench to score Manchester United’s matchwinner in an eventful clash against West Brom.The Reds got 2011 off to a flying start when Wayne Rooney scored his first goal in open play since March after just three minutes at the Hawthorns. An unstoppable volley from James Morrison levelled the scores before Peter Odemwingie missed a penalty for the Baggies. United went back in front when Hernandez nodded home Rooney’s corner, and the Reds went on to seal only their second away win in the Premier League this season.

There was however a late worry for Sir Alex Ferguson as Rooney ended the game limping after a blow to the leg. Early on in the game, United were perhaps lucky not to have Gary Neville sent off. On his last Premier League start, at Stoke in October, he was substituted at half-time and was lucky to get that far as, by common consensus, he should have been sent off. This time he escaped again. Full Report