Sir Alex Ferguson showed complete faith in his second string strikers by keeping substitutes Wayne Rooney and Dimitar Berbatov sitting on the bench even though Manchester United were trailing a brave Southampton by a goal well into the hour mark at St Marys Stadium. He was rewarded as Michael Owen first equalised after 65 minutes then Javier Hernandez won this fourth round cup tie in the final quarter hour.

Make no mistake, the Saints were the most impressive side before the break and were good value for the lead Richard Chaplow gave them on the stroke of half time. Rather than throwing one of his gun strikers into the fray for the second period, Ferguson introduced veteran Ryan Giggs and Nani who both played a decisive part in the comeback. The reward was progress into the last 16 without being forced into an unwanted replay in an already congested fixture list. 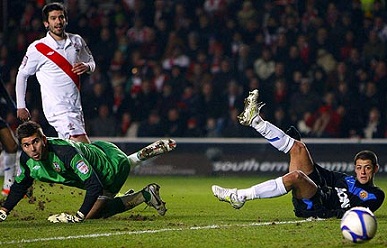 Daily Telegraph – Southampton threatened to repeat their famous 1976 Wembley win over Manchester United when Richard Chaplow gave them a deserved half-time lead against the much-changed Premier League leaders. But, as in Tuesday night’s dramatic comeback at Blackpool, the introduction of the veteran Ryan Giggs helped change the game, with goals from Michael Owen and Javier Hernandez putting the visitors into the last 16.

Having admitted making a mistake by fielding a weakened side in last season’s shock third-round home defeat to Leeds, United boss Sir Alex Ferguson had gone strong against Liverpool earlier this month. But he appeared to forget the lessons of the Leeds loss in picking his team today. Full Report

Southern Daily Echo – Saints were beaten but not disgraced by Manchester United in the big FA Cup fourth-round tie at St Mary’s – having led at half time. Richard Chaplow fired Saints into a deserved 1-0 lead on the stroke of half time with a beautifully struck half volley after breaking from midfield and into the United penalty area with a lung bursting run down the inside right channel.

But for the second time in five days, United came from behind to win away from home. Defeated just once all season, they improved with the 57th minute introduction of Ryan Giggs and Nani. Goals in the last 25 minutes from Michael Owen and Javier Hernandez ensured their passage into the fifth round. Full Report

Manchester Evening News – Comeback kings Manchester United came from a goal down to defeat spirited Southampton and reach the FA Cup fifth round. The Reds fell behind just before the break when Richard Chaplow blasted the ball past debutant goalkeeper Anders Lindegaard.

But just as they did against Blackpool in the Premier League on Tuesday, the Reds produced a stirring fight-back against the League One opposition. First Michael Owen reacted superbly to head in the equaliser on 65 minutes before substitute Ryan Giggs’ slide rule pass set up Javier Hernandez, who squeezed his shot inside the post with 15 minutes remaining. Full Report