Love or hate Red Nev, how sensible are these words from his Manchester United manager Sir Alex Ferguson? “He looks after the young players, I don’t know why they’ve got agents when they’ve got Gary Neville. He does well for these young lads, they all owe him a debt in terms of the ones he has looked after with their contracts. When he walks in to represent them, I think ‘bloody hell, here we go, bloody agony!’ but I’d rather have that than an agent, because you know who he’s working for. He’s there to do the best for the boy.”

United’s club captain has been touted as a new pundit for Sky following the sackings of Andy Gray and Richard Keys from the TV station for sexist off the air comments but Sir Alex still sees the future of 35 year old Neville being at Old Trafford despite injuries indicating this could be his last season as a player. 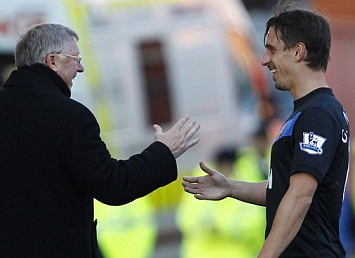 Ferguson insisted that “Gary will have a place at United for ever. Obviously there is a bit of speculation about who replaces Gray and Keys but that is not on my agenda. Of course I would like Gary to stay here and I don’t know about this being his last year as a player. He’s got an ankle injury at the moment but he should be back training next week.”

“I just think players should enjoy their football as much as they can” he explained  “his body will tell him it’s the right time – like Edwin van der Sar feels it is the right time to retire. The remarkable thing about Gary is that he keeps coming back. He is incredible. He has this will to come back from injuries and do well. He is an outstanding person. And it is not easy. I remember starting to get groin injuries at the age of 31 – I quit at 32.”

The wily manager looked at Neville’s options and did not pull any punches “I don’t know if he’d make a decent pundit” he said “he’s not got the experience. He has done the odd one or two on TV, but you can’t judge it on one or two appearances but yes, I definitely believe he’s got coaching abilities. He’s also got leadership qualities.”

Ferguson’s final words to Neville are sure to be echoed by all United fans “Forget about being the new Andy Gray – you’ve got a job for life at Manchester United.”

Does Neville has the potential to be a good TV commentator?

3 thoughts on “'Forget Sky Nev, your future's at United' Ferguson”