When Manchester United visit Wolves on Saturday it will be one day short of the Munich anniversary and unlike some other cretins around the country, you can be certain fans at Molineux will mark that solemn occasion with the utmost respect. Apart from the tragedy itself, Wolverhampton lost one of their own who is still revered to this very day. Duncan Edwards was born in the town of Dudley just south of the city and had it not been for the persistence of United manager Sir Matt Busby, the youngster could have easily signed for the Wolves. The story goes that Busby arrived at the Edwards family home soon after midnight to make sure that he secures the youngster’s signature

Sir Matts determination paid full dividends as Edwards became the youngest player to appear in First Division football and the then youngest England player since the War. In a professional career of less than five years he helped United win two Football League championships and reach the semi finals of the European Cup. Although he initially survived the Munich crash he died as a result of his injuries 15 days later at the age of 21. 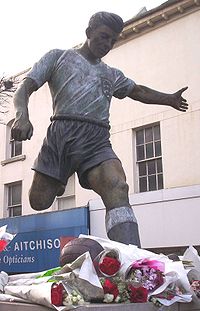 There are many who were fortunate enough to play with or against Edwards and those who simply had the chance of watching him develop, who still insist that Big Dunc was the greatest footballer to ever be produced by England. Old Trafford legend Sir Bobby Charlton simply says that “he was the only player that made me feel inferior” and said his death was “the biggest single tragedy ever to happen to Manchester United and English football”

In Edwards’ home town of Dudley, a statue of the United legend was erected in 1999, which was unveiled by his mother and Sir Bobby. For those who watched Edwards play, he is the greatest ever and is in the thoughts of many on another anniversary of that didaster.

It’s also generally beyond dispute that barring unforseen circumstances, it would have been Edwards instead of the great Bobby Moore who would have become the only English player to lift the World Cup eight years following his death. No wonder the people of Wolverhampton as well as Manchester remain in awe of the young man who was taken away far too soon.

Was Edwards the greatest England player ever?