Debate about the future of Manchester United warhorse Gary Neville continues as he struggles to make a decision about his future. Since announcing that he has played his last game for United, Neville has been weighing up the options of going into a television commentary career or to remain at Old Trafford in a coaching capacity. If any doubts exist as to the value a player with his experience can give to the club, it must have been put to bed after young defender Chris Smalling’s outstanding performance in his initial Manchester derby on Saturday.

The 21 year olds inexperience in such tension filled matches was questioned with City expected to target him as a defensive weakness. He has since revealed however that a quiet talk with injured veteran Rio Ferdinand went a long way towards inspiring him to an outstanding display and must be given much of the credit. 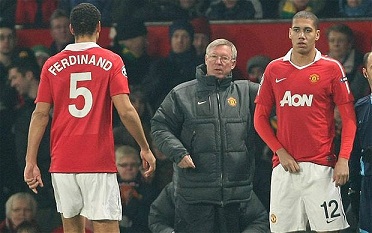 “There was an emphasis on me coming into the team because Rio has been so solid, so to play my part in such a massive game and a big title match was brilliant” Smalling told the Manchester Evening News. “The players around me make it so much easier. They are always talking to me. When I had my first touch I just felt like one of the other lads who play regularly every week.”

“He was making the point that Carlos likes to feel the defenders at his back. So you let him have his touch before you move in and go for him. It was great advice because he is a tricky player. It was a really good challenge for me” he admitted “to have that knowledge to tap into is incredible. You get so much feedback with players you are playing with, players who are injured like Rio and the many coaches we have. It really puts me at ease and allows you to enjoy the occasion.”

“It is great to have that pre match advice but you also cannot beat first hand experience” Smalling said “you can watch as many videos as you want but until you face them it is different. I faced Carlos for Fulham last season and I did really well in one match and then another time he got the better of me. So to be able to re test myself against a world class striker was good”

Smalling’s experience in the derby is a perfect example of how veterans like Ferdinand and Neville can be invaluable to the future of the club. Not that Sir Alex is unaware of it which is why he has made it clear that he’s anxious to keep Red Nev at Carrington.

Do you want to see Neville remaining at the club?