21 April 1999, Stadio Del Alpi, Turin, Champions League Semi Final, second leg –  The man who will be trying to mastermind a Marseilles defeat over Manchester United at the Velodrome on Wednesday night was an influential  member of the Juventus side in that unforgettable match. Midfielder and France World Cup winning captain Didier Deschamps admitted “United played superbly. We did well in the first 20 minutes but after that we really suffered and they deserved to win. We should have won the away leg but at 2-0 up we should have done the hardest part.” Deschamps won everything as a player and has so far had a hugely successful start to his career as manager. He gave Sun Sport’s European Football Correspondent Antony Kastrinakis an exclusive interview at Marseille’s training ground ahead of the French champs’ clash with Manchester United in the Champions League.

Antony Kastrinakis: Didier there is one defeat to United in particular that must still grate you from your playing days

Didier Deschamps: It was 3-2 wasn’t it. The return leg of the semi-final of the Champions League in 1999. Yes, that’s a very bad memory. But I have very good memories from United as a Juventus player too, you know. Anyway I remember after 10 minutes we were 2-0 up and in the final. What happened after? Well, an electricity black-out, ha ha. It happens. We played a pathetic second half. Roy Keane’s goal at the end of the first half put us under pressure and gave them a big lift. 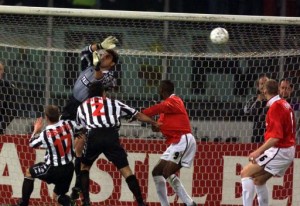 But then he was playing with Dwight Yorke and Andy Cole, they were so fast. It’s one of those ‘accidents”. In the first leg Ryan Giggs had equalized in the last minute. It was fate I think. I only remember the good times I have selective memory and we beat United several times in my time as a player”

AK: It’s that ‘never say die’ attitude that has made United successful and they’re still the same today aren’t they?

DD: Yes, in the end United were crowned champions of Europe in similar fashion after scoring two goals in injury time to come from behind and win the European Cup against Bayern Munich. They have that spirit of ‘always believing’ which is a characteristic of big competitors and big clubs. Even this season I’ve watched them a lot and they keep coming back from behind to win games. They are always capable of reversing a situation. It’s the strength of a great side. They may be in difficulty but need very little to turn it around.

AK: So do Marseille have a chance against United?

DD: We have ONE chance. I think we have that much. The bigger optimists may say we have one per cent, one in a thousand. But there is always one chance. Manchester is of course the big favourite. But of course I believe we can beat them and knock them out. If I don’t believe it how can I tell my players to believe they can do it on the pitch.

Evidently it’s a massive ask for us because United’s objective is not to eliminate Marseille it’s to win the competition. Since the draw I’ve seen a dozen of their matches. It’s a team of realists. They’re not the team they used to be when I was a player when there was this madness, this rhythm. They maybe didn’t have defensive rigour, but this team is a very disciplined team.”

AK: So what do you do against them? 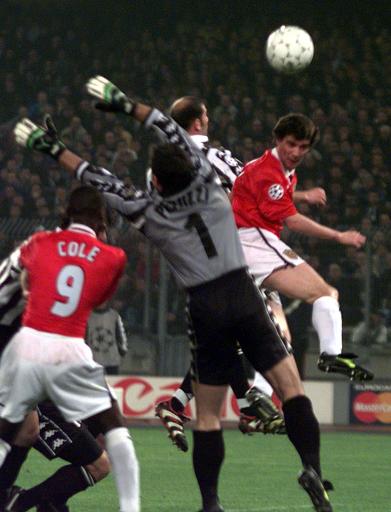 DD: We’re not going to wait for them of course. We will take the game to them. They have a lot of quality up front but our chance is to create them problems at the back. The victory against Chelsea earlier this season, although we were both qualified, was a massive boost for my players. Chelsea played their best side in order to reverse the bad period they were going through.

In a double header it’s more difficult than one game of course. But only in football can you see the smaller team win — it doesn’t happen in any other team sport. In rugby, basketball, handball the big team always wins. Manchester is not Marseille but we will play our chance even if it’s a small one.

AK: As you’ve seen them so many times you must have detected weak points…

DD: I’ve spotted their weaknesses at the back of course. I won’t tell you those now for sure, but it’s certain we will not be content with just defending in the two matches. But United do defend very well, they have enormous talent. What interests me more is the different shapes they use.

They have different types of organisation and what interests me particularly is how they apply it by the different use of players. They sometimes play one striker or two strikers although mostly in Europe they play only one with a reinforced midfield. That’s what Sir Alex Ferguson has done every time.

AK: Rooney’s form in the last year has been the subject of intense scrutiny…

DD: Rooney’s form is already much better. He had a difficult world cup but he’s coming back. Berbatov is the big threat because of his goals. Only one will play of course but Rooney can play on the wing. Even if Rooney hasn’t scored a lot this season he’s still given so many assists for goals. Berbatov is very efficient, even if last season for him was not the best. But they are gifted players that’s why United are top of the league.

AK: So what will it take to beat United?

DD: We will need United to be not exactly at their best and for us to be at our maximum best to be able to beat them. We want to go further, that’s the ambition. The problem is ahead of us is Manchester United.

AK: So should Manchester be afraid?

DD: “Hahahaha. They shouldn’t be afraid. For us it’s better if they are not afraid of us. It’s better they come here certain they will qualify. They come to the Velodrome knowing it will be easy and calm. I prefer them to come like this but I don’t think that will be the case! If United knocks out Marseille it’s normal but what will be unforgettable is if Marseille eliminate United.

Are United showing good enough form to get past the French Champions?