It was not a cup tie at Old Trafford but this United vs Arsenal classic at the old Highbury Stadium has gone down in the annals of history. Long time Arsenal fan Norman McMillan who was just 13 years old at the time, remembers the match in an article written for arsenal-world.net. It records the vivid memories of a young boy mesmerised by football magic irrespective of club loyalties. As he now recalls “It was the last League game played by the Busby Babes – five days before the Munich Air Disaster.”

McMillan explains that “I have seen frequent references to the Arsenal-United game on 1 February 1958 as being the best game ever seen in an English League fixture. Having been present that day and since that time having spent more than 60 years watching soccer at all levels, it is an assessment that I can wholeheartedly agree with. Given what subsequently transpired, it is impossible to begrudge United their thrilling win in front of 63,578  Highbury fans in what was the last League game played by the Busby Babes – five days before the Munich Air Disaster. The teams were 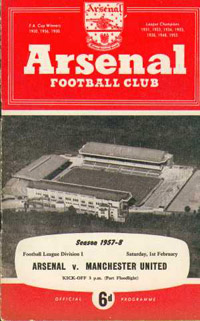 It’s interesting to note that this game was played a mere five days before Munich crash with its tragic loss of life. United notched up an extra ordinary 5-4 win at Highbury, with goals from Edwards, Charlton, Taylor (2) and Violett in this never to be forgotten game. Arsenal’s goals came with two from Bloomfield, Herd, and for me the Man of the Match, the young Derek Tapscott who led Arsenal’s second half resurrection after their drubbing in the first 45 minutes. The mid-table Gunners were on a modest 27pts from 28 games and United were at this time third with 36pts from the same number of games.

United had been playing in the European Cup and the difficulty at this time of travel probably was reflected in their league position. There was absolutely no concessions whatsoever from the English League to European soccer at the time. United were the first British team to enter European soccer (If Herbert Chapman had been at our helm in the 1950s he would have been there pioneering European competitions) and then only because Busby had taken on this challenge in the face down the fierce opposition of the English League and soccer establishment.

The exertions of this commitment however meant that given their league position and points total, United would have been very unlikely to win their third league title in a row, and that without the fateful journey to Yugoslavia to play Red Star in Belgrade. 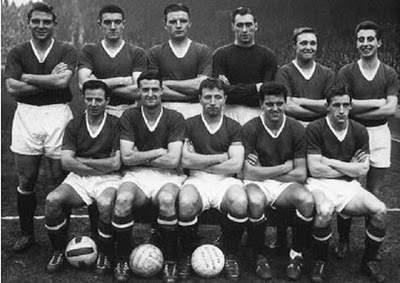 This game, on Saturday, 1 February 1958, indeed typified the Busby Babes. However, the game was made because the Gunners played their part to the full having this brilliant United team on the rack in long periods of the second half. They matched pound for pound the flair and enthusiasm that the Babes brought to this fixture.

This league match has of course poignancy because it was the last the Busby Babes played in England before eight of them perished in the Munich air disaster. Yet even if they had returned safely from Belgrade, the game would still have lingered long in the memory. United led 3-0, a goal by Duncan Edwards leading the storm. His goal was a thing to wonder at when in the first half he drove in a shot, from to me appeared to be just on the edge of the centre circle. It was such a fierce strike that the ball span out of diving Jack Kelsey’s hands and up into the top of the net.

With the Red Star game just four days away however, the inclination was for United perhaps to relax and Arsenal took their opportunity and swept back to 3-3 very quickly after the restart. Again United increased the pressure, mostly through Albert Scanlon’s fierce left sided running, to lead 5- 3 before the home side narrowed the gap again. It was a performance any artist would have been proud of and a fitting memorial for the Babes.

The precocious Bobby Charlton was a young player making his tentative way in this team. Charlton said he never felt second best to any player with the exception of Edwards who was a colossal presence in this United team. Neither Charlton nor Edwards were however the brain of this team, as it had as its fulcrum the talented Dublin lad Liam Whelan. Liam was rested for this Highbury game with the young Colman and Jones coming into midfield.

Arsenal were defeated 19 times that season, finished in mid table. United reached a respectable final position and emotionally reached the FA Cup Final with a make and mend team put together after the crash. They lost 2-0 in the Final on the 3rd May 1958 to a double strike by Nat Lofthouse. The first a hotly disputed barge on the keeper. United went on finally of course to win the European Cup in 1968, but this triumph would have surely come much sooner had the Munich crash not robbed them of such a gifted team.

I was 13 in 1958 and as you might expect from a Gooner, I was totally devastated that we failed to force a win in the last quarter. We had them for most of that period boxed in their half. The support of the crowd was simply tremendous. I do remember however just at the end of the game, Roger Byrne was away down the wing on an overlap and I thought, Oh shit, looks like 6-4. When he put the ball over it was bouncing around dangerously in our box but then relief came when the whistle was blown. I was kind of relieved it had not been worse.

After the Munich Crash, I really did not mind us losing to such a great team. The players that perished in the crash were Geoff Bent 25, Roger Byrne 28, Eddie Colman 21, Duncan Edwards, 22, Mark Jones 24, David Pegg 22, Tommy Taylor 26 and Liam Whelan 22.

There were 14 lost that day including 3 United support staff and 7 journalists, co-pilot, a travel agent, supporter and a club steward. Busby was very badly injured and lucky to survive. Edwards incredible fitness kept him alive for days before he eventually died.”

Football supporters like Norman McMillan are simply irreplaceable, they have seen history made with their own eyes. More importantly, the respect they have always displayed for their rivals puts many of today’s so called fans to shame.