Nobody can doubt that the Manchester United youth ranks are packed with highly talented future stars – let me rephrase that, POTENTIAL future stars, which should guarantee ongoing success for years. Names like Paul Pogba and Ravel Morisson amongst others immediately come to mind while there are a swag of on loan youngsters which include Tom Cleverley, Danny Welbeck, Mame Diouf, Federico Macheda, Corry Evans and Richard De Laet. Sir Alex Ferguson left little doubt when he recently made clear that “They will come back into the first team squad and they will get plenty of games next season” when we asked about his plans.

“They are part of the band of young players coming through at this club. They will all come back in” the boss continued. “At that point, we will then review our squad because that’s the important thing. But we will always put players out on loan. Cleverley has done very well, particularly in his spell at Watford and then at Wigan. He has improved in each case and he is going to be a top player.” 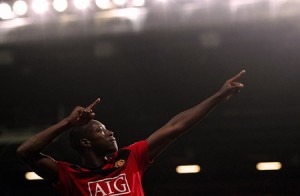 “Welbeck has been fantastic too, it’s just unfortunate that he picked up a bad injury. But they will all be ready for next year.” Sir Alex also revealed that Senegalese striker Mame Biram Diouf will return from his stint with Blackburn as the loan deals have been beneficial for his fringe performers. “Mame has done well at Blackburn too and he’ll come back in” Ferguson emphasised “they’ve all done well.”

“It proves we were right in putting them there in the first place” he explained “for them it’s that experience of being exposed to regular football that really brings them on so that they are ready to play for Manchester United.”

The major doubt for Ferguson is the future of England Under 21 international Welbeck who has been a big hit at Sunderland with boss Steve Bruce thought to be keen on making the deal permanent. Sir Alex is determined to hang on to the 20 year old however even though Welbeck insists he will wait until the end of the season before deciding on his next move.

“I’ve not really thought too much about what I’m going to do but I’ve really enjoyed my time at Sunderland” said the youngster “it has benefited me massively just to be around with the big boys week in, week out. I’m delighted with that but the end of the season will be the time to sit down and think about the future. I’m like anyone else” he confessed “I want to play every week. Football is my job. I like training hard and then playing in games but we will just see what happens in the summer.”

Should Ferguson manage to hold on to all his young talent, they will join a squad of under 25 year olds like Javier Herandez, Nani, Anderson, Chris Smalling, Fabio, Rafael, Jonny Evans, Darron Gibson, Gabriel Obertan and Bebe with even Antonio Valencia and Wayne Rooney barely 26 by the start of next season. Granted some of these players may be moved on by Sir Alex by then but a young squad which will be the envy of every rival will remain at Old Trafford to carry on with the Ferguson youth legacy.

Will Ferguson’s youth policy continue to bring success for United?