It’s come down to a simple equation. Fifteen points left to play for from which Manchester United need to get ten to ensure the Premier League trophy returning to Old Trafford for the fourth time in the last five seasons – and clinch a record 19 titles in the process. Liverpool born striker Wayne Rooney is desperate for United to complete the job confessing to United Review recently that “winning a record title and overtaking Liverpool would mean so much to us players as well as the fans. I know all the Everton fans want us to do it and that’s our aim”

Do you think the FA Cup win over Arsenal gave you a psychological advantage in the title race? – I think so. We had a couple of disappointments with the Chelsea and Liverpool results and we knew that beating Arsenal would give us that edge to push for the title. You can’t wait for the games to come at this stage of the season. I think we have got a great chance of going all the way this year. 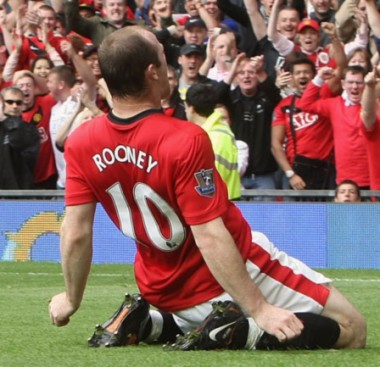 We’ve done well at home this season and made Old Trafford into  a fortress – Yes, our form has been good. We’re always expected to win at home, but we always believe we can win no matter who we play. I’ve been a player in the away dressing room and I know the fear you feel before the game when you’re not really expected to get anything from it. So we’ve got that psychological advantage even before the game starts, but we know we’re good enough to beat anyone here.

What’s your assessment of Javier Hernandez’s first season as a Red? – He’s just taken it all in his stride. He’s a lovely lad, who’s always smiling around the dressing room, and on the pitch he’s been brilliant. You can see he’s got a natural eye for goal but what’s surprised a lot of us is how good he is in the air. He spends ages practising after training.

And in the fit-again Antonio Valencia you have someone who is going to provide all the forwards with great service from the wing – I was probably the happiest person in the team to see him back! And he looks like he’s never been away. Having Nani on one wing and Antonio on the other is fantastic because they each bring something different. Nani has created a lot of goals but he’s more about dribbling and getting shots off whereas Antonio is more focused on getting down the line and whipping the ball in. It’s a good mixture for us to have.

When you get to this stage of the season do you feel nerves or do you savour the challenges? – You just look forward to every game at this stage and you have to enjoy it, especially when you’re in the running for a couple of trophies. It’s exciting for the fans and it’s exciting for the players as well knowing that you’re just a few weeks away from possibly winning a major trophy or two.

Is the target of a record 19th title something that plays on the fans’ minds more than those of the players? – No, it’s definitely something I’ve been thinking about a lot. I’m obviously from Liverpool and grew up as an Everton fan, so to be part of the team that wins a record title and overtakes Liverpool would mean so much to us players as well as the fans. I know all the Everton fans want us to do it and that’s our aim.

So here’s the chance to give your Merseyside friends what they crave Wayne. Ensuring all three points are taken off your old club on Saturday will go a long way towards it.

Are 10 points out of the last 15 a reasonable target for United?