The deadly triumvirate of Law, Best and Charlton swept opposition from its path and led Manchester United to win the FA Cup in 1963 and the League in 1965 and 1967. Had it not been for a cruel injury, Law would have also been part of the side which became the first English club to lift the European Cup.

His statue stands outside Old Trafford together with fellow legends Bobby Charlton and George Best. In the 1960s, Denis Law was ‘The King’, a goal scoring genius who relentlessly attacked the game – and the occasional opponent, with a dedication and enthusiasm which held his legions of loyal subjects in devoted awe. The deadly trinity of Law, Best and Charlton swept opposition from its path and led Manchester United to win the FA Cup in 1963 and the League in 1965 and 1967. Had it not been for a cruel injury, Law would have also been part of the side which became the first English club to lift the European Cup. 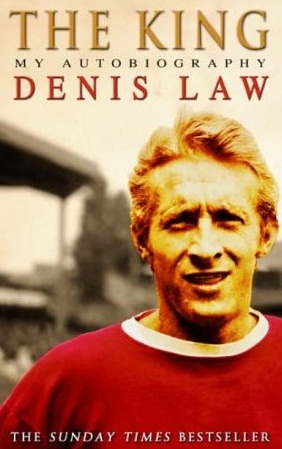 Born in Aberdeen in 1940, Law played his first professional game for Huddersfield in 1956. He moved to Manchester City before being among the very first British players to play on the continent of Europe, joining Torino in 1961. It was in August 1962 that Law moved back to Manchester, this time to United, for a record transfer fee of £115,000. He immediately won the hearts of the Old Trafford crowd by scoring twice in his début game.

Many more goals were to follow. 160 in 222 matches, many of them spectacular, all of them executed with Law’s trademark panache. Law was European Footballer of the Year in 1964 and went on to win 55 caps for Scotland. Many of these were titanic clashes with Auld Enemy England, including the now legendary 3-2 defeat of the then World Champions at Wembley in 1967.

The King tells the story of an Aberdeen boy who rose to the very pinnacle of football excellence from humble beginnings. Packed with hilarious and revelatory behind-the-scenes stories and peopled by Law’s fellow football legends like Matt Busby, George Best and Jimmy Greaves, Law’s book takes the reader back to the game’s glory days. In so doing, we learn why, to his legions of fans, Denis Law was, and will forever remain, the King.

This 320 page hardback autobiography first published in 2003 is a book which will probably be passed over by most people who don’t support either Manchester United or City. That would be a mistake for anyone who follows football. It’s a very easily read autobiography, if a little too diplomatic at times, but Law did more than enough in his career to keep the reader interested.

He played for two of Scotland’s greatest managers – Shankly at Huddersfield and Busby at United, was one of the first British players to move to Italy, a section which  is worth its price alone, and played alongside the likes of Kopa, Puskas, di Stefano and Yashin in a ‘Rest of the World’ selection. Law and his family still live in Manchester to this very day.

Does anyone reading this have any memories of Law’s heydays at Old Trafford?